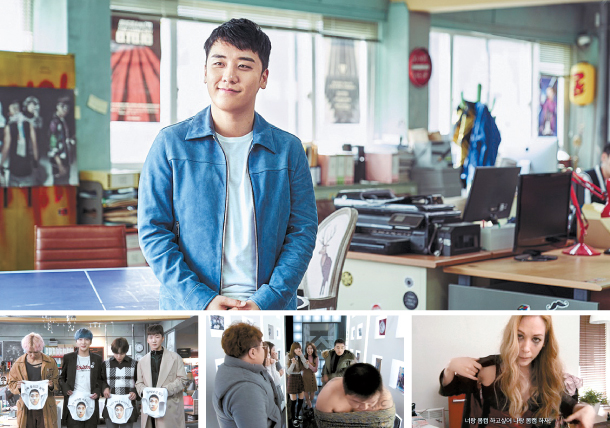 YG Entertainment’s new Netflix sitcom, “YG Future Strategy Office,” has been inundated with criticism from the public since its release on Oct. 5 due to scenes depicting impolite behavior, profanity and inappropriate sexual situations. [YG ENTERTAINMENT]

Black comedies are tricky to pull off because they usually fall into one of two categories: not funny or rude. Unfortunately, “YG Future Strategy Office” is both. YG Entertainment’s new Netflix-backed series is an attempt to explicitly mock the drug and sex scandals involving its big-name celebrities through humor, hoping to convince the public that the scandals are not as serious as they sound.

But the ambitious project by director Park Joon-soo - well-known for low-budget comedies “The God of Music” and “Enemy of Broadcasting” - has only upset people. Fans in particular are furious about how their idols in the entertainment world are cursed, sexually abused and generally demeaned by other characters.

The series starts with Big Bang member Seungri being banished by YG’s actual CEO, Yang Hyun-suk, to a dead-end department, the newly-created Future Strategy Office, after he gets embroiled in a scandal. It is packed with all the troublemakers at YG. As the head of the department, Seungri wants to get back in Yang’s good graces. He works hard to project a positive image for the agency by leading a “Clean YG” campaign. Situations go over-the-top, as the office demands saliva and even urine tests from YG artists to make sure they are drug-free.

This is an attempt to make light of YG artists mired in drug scandals. Big Bang members G-Dragon and T.O.P. were tried for smoking marijuana - G-Dragon was acquitted and T.O.P. got a suspended sentence - and Park Bom, a former member of 2NE1, was caught at the airport trying to smuggle in narcotic amphetamines from the United States.

But then the jokes start to get uncomfortable. In the first episode, while Seungri wanders around the agency to recruit artists for an upcoming YG Family event, he encounters Blackpink members. Suddenly, one of Seungri’s guards takes off his shirt and asks for the girl group’s members to autograph his back. Fans have complained that the scene was unnecessary and inappropriate.

The worst comes in the last episode. Seungri brings YG’s new model, Alex, to talk via a webcam to a female foreign investor. The investor, who is depressed and drunk at that moment, asks Alex to get naked with her. When Alex refuses, Seungri says, “Who are you to say no?” and scolds him for refusing to follow the orders of “the boss.” Seungri’s co-workers forcibly take off Alex’s clothes.

“I don’t know what the producers were trying to portray through this program,” wrote a high-school fan who runs a Big Bang fan account in Instagram with over a thousand followers. “I find this series very problematic.”

“I am furious with the way Seungri is portrayed in this show,” the fan wrote. “In one of the episodes, a co-worker spills milk in his face and also makes fun of his penis size. This is sexual assault. Also, I hate the way he is portrayed as this superior, bossy figure who acts arrogant. I know that in reality, he is this kind, respectful guy who cares a lot about his fans and people beneath him.”

Some Korean fans are boycotting the show, and the hashtag “Boycott YG” dominates online platforms.

Chinese viewers are also claiming that show “looks down” on China. According to an article by China’s Sina Entertainment News, the program used the wrong version of China’s map, leaving out a southeastern coastal area of China. In a scene where two Korean guards wearing Chinese traditional clothes are caught by a Chinese security, one of them shouts, “I am a pig!” in Chinese.

But some viewers actually enjoyed watching the star-studded cast.

“As a fan of Jinusean, I enjoyed watching the duo act in the series. It was just a lay-back series where all the great superstars have gathered,” said a viewer.