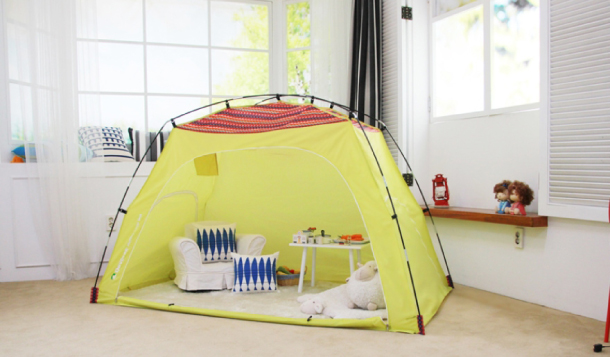 Indoor tents are a rising star among winter items this year. [11ST]

Disposable hot packs are a must-have item for Kim in the winter, but this year she has started a little earlier than usual.

“I wasn’t planning to use them before I left the house this morning, but my hands were so cold I had to pull one out from a stack I left in the office from last year,” she said. “I feel like the cold is arriving earlier. Last winter, I started using hot packs in November. I also ordered a set of warm underwear online yesterday.”

On e-commerce website WeMakePrice, disposable hot pack sales shot up more than seven fold between Oct. 1 and 11 compared to a month earlier. Electronic hand warmers were equally popular, with revenue shooting up 641 percent during the same period.

“Even on a week-on-week comparison, sales of disposable hot packs shot up more than threefold between Oct. 1 and 11,” said a WeMakePrice spokesperson.

Consumers are also looking for ways to keep themselves warm at home. Sales of electric blankets shot up between Oct. 1 and 11 month-on-month, increasing by 382 percent. Electric mats, which are generally thicker than blankets and can be placed on floors as well, also recorded a sales increase of nearly six times during the same period.

At 11st, another e-commerce website, electronic seat cushions rose 47 percent between Oct. 5 and 11 compared to the previous week. Fan heaters were popular as well, having sold 68 percent more during the same period.

An unexpected winter item that customers increasingly purchased at 11st was indoor tents. They are made with fabric that blocks cold wind, keeping the internal temperature the same. The product has risen to fame in recent years, especially among families with children, as it can be used to cut down on heating costs at night.

Between Sept. 12 and Oct. 11, sales of the tents increased nearly nine times compared to the previous four weeks. This was a record among all winter-related products during the period.

But the most notable hike in demand in fashion was for last year’s stand-out star, the bench coat.

“Bench coats usually started selling in late October, but this year it was so cold we started long before that,” said a Lotte spokesman.