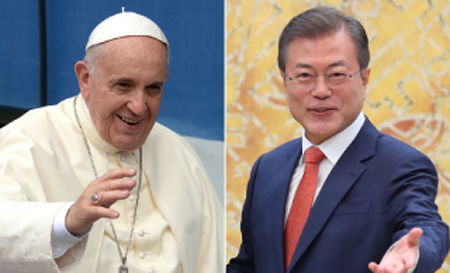 October 22 is the feast day of Saint John Paul II. The 264th pope is considered to be the most inspiring figure to people around the world among all the pontiffs of the 20th and 21st centuries. As the first Polish pope, John Paul II left great marks on history in the 27 years of his papacy. He was called the “athlete of God,” who made great contributions to the reconciliation of religions and the fall of the Eastern European Communist bloc.

In June 1979, John Paul II visited his native Poland. That was the year after he became pope. Poland was under communist rule after the devastations from World Wars I and II. Before millions of people, he said that for the dignity of humanity and for the future, they should not fear the struggle of the present. Lech Walesa’s Solidarity gained influence, and that led to the fall of the communist regimes and democratization in Eastern Europe.

On May 3, 1984, Pope John Paul II descended an airplane ramp in Korea and kissed the “land of martyrs.” He visited here for the 200th anniversary of Korea’s Catholic Church and for the canonization of 103 Koreans, including Father Kim Dae-geon. After receiving a cordial welcome from President Chun Doo Hwan, the pope visited the Mudeungsan Stadium in Gwangju and said he understood the tragedy and the pain the people of Gwangju had suffered. He also stopped at Geumnamro Street in the city.

In Busan, he spoke to workers about fair wages and received gifts, including a cross made from socks by an imprisoned democratization activist and a box of tear gas from student activists. In Sorok Island, he blessed and consoled leprosy patients. The pope had said that he wanted to visit underprivileged and marginalized places rather than seeing Korea’s growth and development.

On October 17, President Moon Jae-in is to meet Pope Francis and relay an invitation to him from the North Korean leader Kim Jong-un. Pope Francis, who is from Argentina, is the first South American pope and is a reformist. “Bergoglio’s List” is a book about how he saved people from oppression during the dictatorship in Argentina from 1976 to 1983.