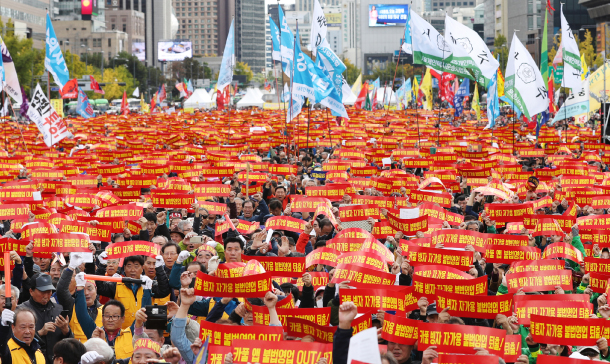 Tens of thousands of taxi drivers from across the nation descended on Gwanghwamun Square in central Seoul Thursday to protest Kakao’s planned carpool service, saying the smartphone app will take a devastating toll on their earnings.

The rally, which began at 2 p.m. and was organized by four major taxi unions, was the latest show of anger by taxi drivers - mainly from the Seoul metropolitan area - who are demanding that Kakao Mobility scrap plans to launch its new carpooling app.

Kakao Mobility is a subsidiary of Kakao, operator of the country’s most popular chat app, Kakao Talk. Kakao Mobility’s flagship app is Kakao T, a taxi-calling app launched in March 2015, which links users who need a ride with taxi drivers. Kakao T has amassed 16.92 million users as of last month, according to the company, with some 224,000 out of 270,000 taxi drivers in Korea subscribed as Kakao T drivers.

Kakao Mobility has been vying to enter Korea’s nascent carpool business since February, when it acquired Luxi, a local carpool startup, for 25.2 billion won ($22 million). Domestic law basically bans personal vehicles being exploited for business purposes, but Korean carpool services have found a loophole that allows carpooling during “commuting hours.”

The Passenger Transport Service Act doesn’t spell out a specific time range for the term, prompting taxi drivers to urge the government to amend the law to ban carpooling entirely.

Kakao Mobility has yet to announce a release date for the carpooling app but opened recruitment for drivers last Tuesday, vowing to cover shortages in taxis during peak hours, all “within legal boundaries.”

The company said in a statement that Kakao T usually receives 230,000 calls for taxi rides from 8 to 9 a.m., but that only 26,000 Kakao T vehicles are available to provide services. With the carpooling app, users can find alternative ways to get to work, Kakao pointed out. That explanation did little to defuse the anger of taxi drivers on Thursday.

The organizing committee said 60,000 taxi drivers convened in Gwanghwamun Square to join the rally, while police estimated 25,000 people gathered. In a joint statement, organizers said Kakao Mobility was out to “crush taxi drivers’ right to live,” and urged the central and local governments to clamp down on people who were using their personal vehicles to “incapacitate the order of passenger transport.”

“Taxi drivers are someone’s father, mother and children,” said Park Kwon-soo, head of a union of private taxi drivers. “We’ve come together here today to implore [Kakao] to let us eat three meals a day with our family without worrying about our livelihoods.”

The ruling Democratic Party formed a special taskforce on the issue Thursday and said it would review the case and discuss ways to respond to the conflict with government authorities.

Society “needs a sharing economy at the dawn of the fourth industrial revolution era,” said Rep. Jeon Hyun-heui, “but on the other hand, we can’t ignore 400,000 workers in the local taxi industry and its importance to many citizens who consider taxis as their main transportation mode.”

Kim Kyeong-wook, head of the Transport and Logistics Office at the Ministry of Land, Infrastructure and Transport, said the ministry has reached the conclusion that it would be “reasonable” to give the green light to Kakao Mobility’s new carpooling app but restrict people to using the service only twice a day - once when they go to work and another when the return home.

The rule will hopefully solve the vagueness about the law that says carpooling is allowed only during “commuting hours,” said Kim, because Korean workers go to work and get off at various times throughout the day.