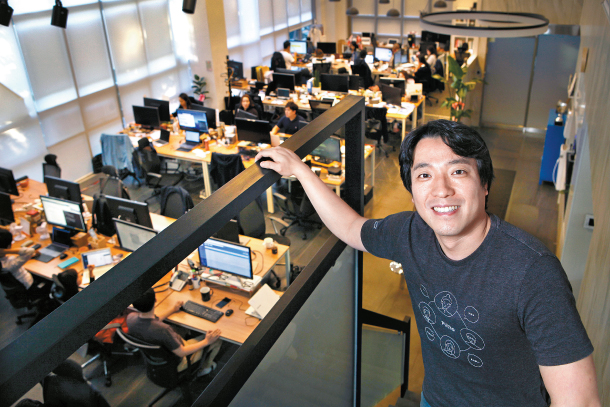 Simon Lee, CEO and founder of Flitto, poses at the company headquarters in southern Seoul. The six-year-old start-up is set to post profit in fiscal 2018 for the first time thanks to new income sources from language data sales and video translation services. [PARK SANG-MOON]

Ddeong-gae is a YouTube channel with over 2.67 million subscribers. It is the second most popular meokbang (eating show) in Korea and over half of its viewers are outside Korea. The two brothers who do the eating have been providing subtitles in several languages including English and Japanese.

As Korea’s meokbang - better known abroad using the transliteration “mukbang” - and other types of videos gain international fame, so has the demand for subtitles in other languages. For Flitto, a Korean online translation company, the phenomenon is a cash cow that did not exist a year ago.

The six-year-old Seoul-based start-up has recently started working with a number of digital entertainment content companies, entertainment giants such as SM, JYP and YG as well as companies that want to promote their products through YouTube channels. Sandbox Network, the agency behind Ddeong-gae, is one of them.

“2018 was the first year that any Korean company began using YouTube for its global outreach,” said Simon Lee, CEO and founder of Flitto, in a recent interview with the Korea JoongAng Daily. “Up until last year, YouTube was but one of the channels they used for promotion.”

Although YouTube provides automated subtitles, the accuracy isn’t very good. It encourages users to voluntarily translate subtitles but some play pranks, posting verses from the Quran or even curses. Translations can be outsourced to professional translators, but that costs a lot. For content lasting up to 10 minutes, it costs around 1 million won ($883), too much for the average content creator, who never knows how much income he or she may get out of a single video clip. One million views roughly translate into 1 million won in revenue.

The fledgling video translation service has been growing and will contribute more than 10 percent of all revenues this year.

The Flitto mobile app, which also operates on the web, accepts applications from users for translator positions and gives them qualifying tests. Translators for the app have differing status - from regular to professional. The latter can charge more for their service.

There are 24 languages offered and the app works peer to peer. Users upload on the mobile app sentences or phrases that they wish to get translated. They appear on a bulletin board that anyone can access and the translators come up with translations. Users requesting translations offer rewards in the form of points - from 100 to 1,000 - and one point translates into one won. Only translations that are accepted by users receive rewards.

The app recently began collecting users’ voice data by having them dictate designated phrases. It also collects elementary-level translation data by encouraging users to participate in a kind of translation challenge game. Users are given reward points for the voice data they are providing.

These techniques of collecting voice data involve a number of psychological and linguistic apparatuses including game theory designed to generate the most desirable output, and Flitto collaborated with academics in the field.

“Psychologists have praised how excellently we have developed our algorithm for the best use of collective intelligence,” the CEO said.

The participation of users over the past six years - it now has 400,000 daily active users - gives Flitto another unexpected revenue stream : language data.

As practically all tech companies in the world are deploying artificial intelligence, they need massive language pairs - such as English-Korean or Korean-English - to train their own machine learning-based translation platforms. 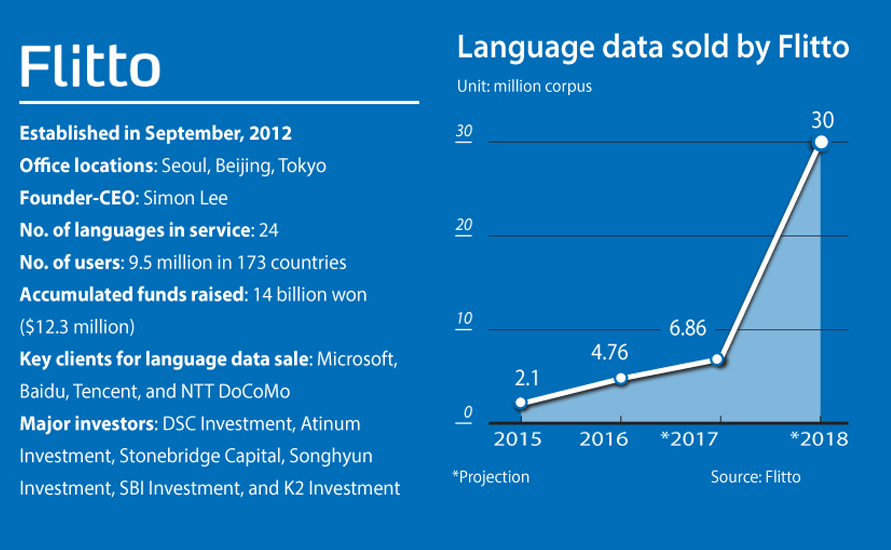 Flitto is expected to have generated more than 200 million accumulated corpus - a collection of texts of language presented in electric form - by the end of this year and is poised to sell over 30 million corpus this year alone. That is almost five times last year’s figure, and clients include Microsoft, Tencent and Baidu.

There are more prestigious companies involved but Lee couldn’t disclose them due to non-disclosure agreements. Thanks to the robust sales of language data, Flitto is set to report 10 billion won in revenue this year, up 376.2 percent from 2.1 billion won the previous year. It will be the first year it reports a profit.

“When thinking about our business model from six years ago, we have achieved a great deal of progress,” he said. “I wouldn’t have been able to come this far if the business was only about making money.”

Lee’s relentless passion for translation technologies dates to when he was a teenager. Born in Kuwait, Lee lived in various countries including Saudi Arabia and Europe because of his father’s career. The long periods spent abroad led him to take an interest in languages. A graduate of the Daewon Foreign Language High School in Seoul, he launched a crowdsourced translation service, Flyingcane, the predecessor of Flitto, while studying business administration at Korea University.

The company, headquartered in Seoul, has offices in Tokyo and Beijing and plans to set up a Silicon Valley office early next year for better communication with business partners in North America.

With the company’s valuation estimated at above 100 billion won, the time has come for Lee to consider its future. He says he is okay with Flitto being bought by a larger company or taking it public. What’s certain is that he will keep working in the field of translation, his true passion. 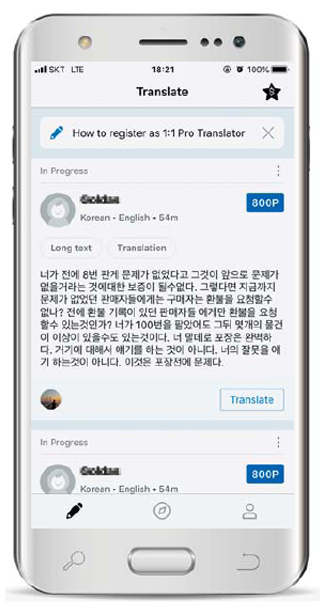 Q. What makes companies pay attention to translation for their video content?

A. Large companies have been migrating to YouTube for advertising and all major entertainment agencies - SM, YG and JYP - began using YouTube as channels to promote their artists and new products. It’s mainly because the number of views coming out of Korean TV networks is limited.One show on a TV network lasts 60 minutes and has a finite number of ads. But the number of ads can grow five-fold when it comes to 10-minute content on YouTube. YouTube can be the only channel for foreigners to get access to Korean video content. There is no restriction in the content they can create.

The size of an audience, or a country’s population, is crucial for content to be successful. Indonesia has a population of 260 million and when Muslims using sister languages in neighboring countries - in Malaysia, Brunei, Singapore - are taken into account, the number of views from Indonesian-speaking users amounts to 400 million. Kim Dong-ryul, a popular ballad singer in Korea who is not very well known abroad, got 16 million views for his most popular number, the blockbuster hit “Masterpiece of Memory,” put on YouTube in 2011. But his Indonesian counterpart might have gotten 150 million views. Top Indonesian singers can get as many as 350 million.

Which language do you find the most challenging when it comes to translation?

Hindi. Indian languages are so diverse, complicated and difficult that even Indians have hard time understanding each other. A foreign corporate customer asked us to collect a Hindi database and we have been doing so for the past five months. But verifying the accuracy will be another challenge.

You announced a plan to open your voice and text language data to the state-run National Information Society Agency by the end of this year to help the Korean government build a standardized language database for the minimal cost of 1.1 billion won. What prompted the decision?

In many foreign countries, start-ups can easily jump into the translation business because their government distributes the data for free. The Korean government said it was going to launch such a project, thus we decided to support it to help local start-ups in artificial intelligence prosper - at one 10th the original expense.

There are pros and cons to whether the government should take the lead in supporting start-ups. What are your thoughts?

It’s a structural problem indigenous to the Korean corporate culture. For a virtuous cycle in the start-up ecosystem to be created, a fledgling start-up should raise funding from the government as well as from an established large company. The start-up grows and succeeds in an exit - by being acquired, mostly by bigger companies - and is supposed to start supporting newbies in the start-up community.

The Korean government began providing subsidies and other forms of support around 2012 in imitation of Israel, a successful example of the virtuous cycle ecosystem. Contrary to expectations, major Korean companies did not acquire any Korean start-ups for the next four to five years. In the meantime, those start-ups went bankrupt. The government could never retrieve its investment. Now, 90 percent of the start-ups I knew between 2012 and 2013 no longer exist. One company got acquired.

Google, Apple, Facebook and Microsoft did not grow on their own. They grew by combining their technologies with those of other start-ups. But Korean corporate giants - the top four conglomerates, for example - have never grown that way. They still think it’s okay to buy some leftover technologies, not a promising start-up.

We have faced a dilemma too. Our estimated valuation surpasses 100 billion won and no established Korean company dares to pay such a huge amount. The biggest local acquisition price for any local start-up to date was 60 billion won - the Gimgisa navigation mobile app by Kakao in 2015.

Is there any start-up that you are personally interested in?

I have been paying particular attention to Juul, an American e-cigarette start-up. [The sleek product, highly popular in the younger demographic, is known as the “iPhone of e-cigarettes.”] It was interesting to see that a start-up chose e-cigarettes for a business. The same is true with Dollar Shave Club, a razor subscription service. Since the United States barely has regulations and restrictions for entrepreneurs, such ideas could come out and succeed, I think. Who in Korea would say someone who comes up with the idea of an e-cigarette or razor subscription is creative? For more start-ups to prosper, the culture of accepting open-mindedness is crucial.