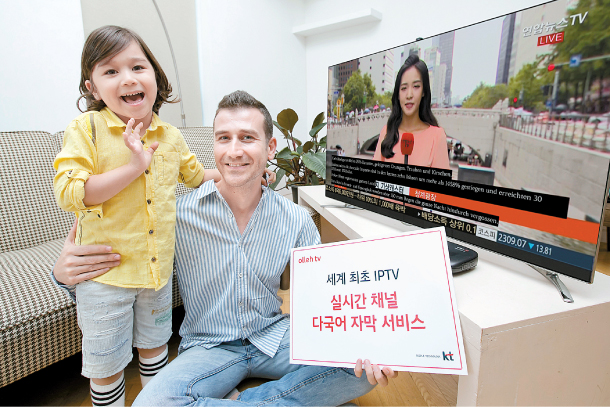 The subtitle service is powered by a Google Translate-based technology that the mobile operator developed itself. The subtitles come in real time with a lag of only a few seconds.

“We are planning to add Thai and Filipino to our subtitle service by the end of this year,” she added. “We chose to offer subtitle services for the languages that Google Translate translates best, and are spoken most by foreign residents in Korea.”

The subtitle service works for all programs including news, reality shows and drama series. Users can select the subtitles they want to see through the Olleh TV menu.

This is not the first time the mobile operator showcased the subtitle service. In February, KT installed 5,000 IPTVs equipped with the multilingual subtitle service at Olympic venues to broadcast competitions and other activities during the 2018 PyeongChang Winter Olympics. At the time, it offered subtitles in English, Chinese, Japanese, French, German and Spanish for foreign athletes, spectators and staff.

KT said it hopes the service will help non-Korean speakers better understand local news in their native languages and have an easier time adjusting to life in Korea. There are around 320,000 multiethnic families and 1.36 million foreign residents in Korea, according to data published by Statistics Korea in 2017.

“I hope that the real-time multilingual subtitle service, which KT first showcased in Pyeongchang, will help multiethnic families and foreign residents feel more included,” said Lee Sung-hwan, a senior manager of KT’s media division. “We will continue adding more TV channels and languages so we can help even more foreigners and multicultural families.”