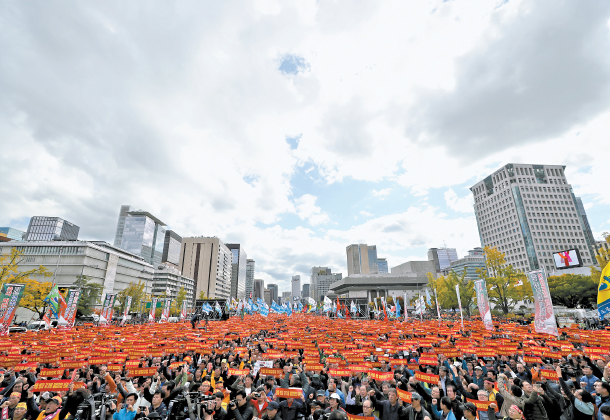 Taxi drivers from nationwide wage a protest against the introduction of Kakao’s carpooling service at Gwanghwamun Square in central Seoul on Oct. 18. [YONHAP]

It has been eight days since the mobility unit of Kakao began recruiting drivers for its upcoming carpooling service. But a long road is expected for Korean residents hoping to share rides using mobile apps due to the government’s ambiguous stance toward the proposed service and fierce protests from taxi drivers.

“We are set to announce measures on revitalizing the sharing economy by year end,” he said when a reporter asked him if the government has any plans to come up with measures on carpooling services.

The meeting followed a one-day collective strike by some 60,000 taxi drivers on Oct. 18. Leaving behind their vehicles, drivers from around the country gathered at Gwanghwamun Square in central Seoul. They claimed the kind of carpooling service Kakao Mobility is set to introduce would “kill” the taxi industry. 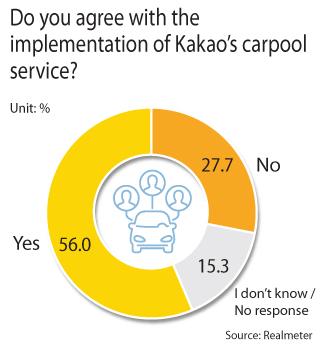 “Kakao Mobility is already dominating the market with Kakao Taxi,” according to a statement from groups representing the taxi drivers. “It is now taking steps to launch a carpool service when disputes over the legality of the service and its impact on the livelihood of taxi drivers have not been resolved.”

The groups include taxi unionists as well as private taxi drivers.

Having acquired carpool start-up Luxi for 25.2 billion won ($22.2 million) in February, Kakao Mobility announced in March it would launch a carpooling service in the latter half of this year. A public notice on recruiting carpooling participants, posted on Oct. 16, was part of the plan.

Personal vehicles are banned from being used for business purposes in Korea, but Kakao found a loophole: operations during “commuting hours.” According to Article 81 of the Passenger Transport Service Act, automobiles other than those intended for business cannot receive compensation for journeys.

Since the phrase does not define commuting hours, taxi drivers insist that the new Kakao service is no different than “24-hour” operations and infringes on their business.

The prospects for the new service are now bleak as Kakao is waiting for the government to come up with guidelines on commuting hours and the maximum number of trips allowed per day.

“We have been hoping to find common ground with taxi drivers over the course of government-led seminars and meetings in the past year or so,” said a Kakao Mobility spokeswoman. “But we have faced only incessant criticism from taxi drivers and their collective boycotting of those events. We are at a standstill on the carpool service.”

Given the negative reaction from taxi drivers, Kakao has decided not to disclose the number of users who have applied to become carpool drivers through the mobile app, she said.

The Google app store has recorded over 100,000 downloads of the app. Applicants are asked to enter personal information, including resident registration number, mobile phone number and car plate number and upload a photo of their vehicle. Apple’s app store downloads are unknown.

Aside from taxi drivers fearing a loss of revenue to Kakao’s carpooling app, reaction to the carpool service has been good so far.

A survey by poll agency Realmeter of 5,000 adults nationwide on Oct. 19 indicated that 56 percent of respondents agreed with the adoption of the service, saying it would be convenient. A total of 28.7 percent opposed, citing threats to the livelihood of taxi drivers. The remaining 15.3 percent either refused to answer or responded that they have no idea.

Many taxi customers are unhappy with taxi services. Even though taxis in Korea are cheaper than in many other countries, drivers here are criticized for cherry-picking customers during peak hours and are notorious for poor attitudes and bad service.

“I want to see taxi drivers compete against carpool services so the quality of their service increases,” said Kim Sun-jung, a corporate worker who often takes taxis late after work. “I don’t mind paying a little bit more if the taxi service gets better.”

“Demand for carpooling has increased on the belief that the sharing economy can balance the weaknesses of taxi services,” said Sung Han-kyoung, professor of economics at the University of Seoul. “The government should help the taxi industry’s IT capabilities, and the taxi community should also make efforts to beef up competitiveness.”