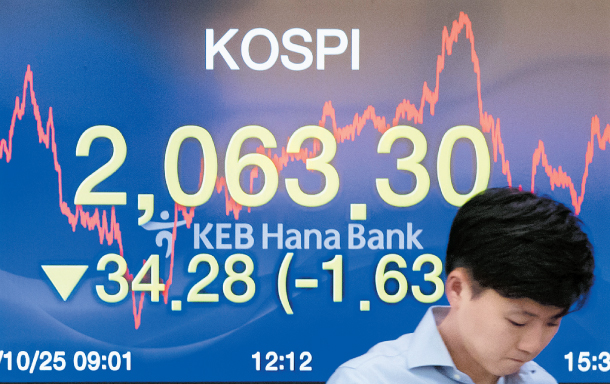 A board at KEB Hana Bank in central Seoul on Thursday shows the Kospi closing at 1.63 percent lower than the previous day after losing 34.28 points. [YONHAP]

Korean stocks took steep dives in early trading Thursday, with the Kospi losing 3 percent. After stabilizing, the index closed down 1.63 percent and the Korean won again depreciated against the U.S. dollar.

The jitters in the market are expected to continue as markets worldwide suffer instability and after the Bank of Korea (BOK) released a third-quarter economic growth figure that was the slowest in nine years, raising doubts as to whether the Korean economy could achieve the BOK’s recently readjusted growth forecast of 2.7 percent.

This month alone, the market has fallen 11 percent, and when compared to the beginning of this year, it is down nearly 17 percent. 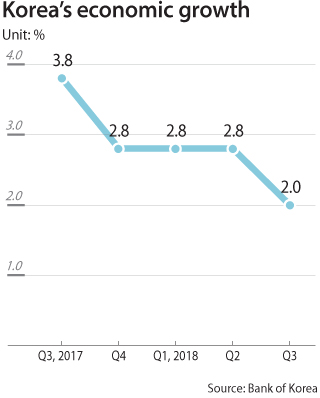 Thursday’s trading started with a loss of nearly 50 points, or 2 percent. At one point, it lost 63.77 points, or 3 percent, just barely clinging above the 2,000 mark. Later, the market stabilized somewhat.

The tech-heavy junior market Kosdaq wasn’t spared the bearish sentiment. The Kosdaq closed down 686.84 points or 12.46 percent on Thursday. It has also been falling over the last three consecutive trading days.

The massive sell off by foreign investors helped the Korean won see its value fall further with the won closing at 1,138.00 won against the greenback, just 2 won away from 1,140 won. The last time the won was at 1,140 won was on Oct. 11.

“The negative impact of the trade conflict is being reflected in American companies,” said Lee Kyung-min, an analyst at Daishin Securities. “The downward pressure on the global market is increasing as uncertainties over next year’s corporate performances have grown.”

Some analysts said the bearish sentiment has spooked retail investors and they are dumping shares.

The market is falling as prospects for Korea’s economy grow dimmer.

The economy grew 0.6 percent in the third quarter, the same as in the second quarter and the lowest rate since the fourth quarter of last year, when it actually fell 0.2 percent.

Construction investment plunged 8.6 percent year on year, the worst figure since the first quarter of 1999, when the country was reeling from the global financial meltdown. When compared to the previous quarter, it was down 6.4 percent, the worst level since the second quarter of 1998.

Analysts said the government’s attempt to cool off the real estate market translated into a cooling off of the construction sector.

Exports and domestic consumption were in better shape despite an ongoing trade war between the United States and China.

Private consumption was up 2.6 percent compared to a year ago and 0.6 percent quarter on quarter.

Government spending registered a 4.3 percent on-year increase, or 1.6 percent quarterly, because of a rise in health insurance costs.

The BOK saw the weaker growth as a result of sharper economic growth a year ago. It said it expects the situation to improve in the fourth quarter when the effects of government policies including tax cuts on new car purchases are reflected.

But in order for the economy to reach the 2.7 percent that the central bank projected, it needs to grow at least 3.2 percent in the last three months, which at this point seems nearly impossible.

The BOK has lowered its growth forecast twice this year. In January, the BOK projected this year’s growth at 3 percent, but lowered it to 2.9 percent in July. Earlier this month, the central bank shaved its growth outlook again.

An Young-jin, an economist at SK Securities, projected that the economy will find it hard to bounce back since the factors that are dragging it down won’t improve anytime soon.

“Things are not that good if we look at leading indicators that show the prospects for the construction industry,” An said.