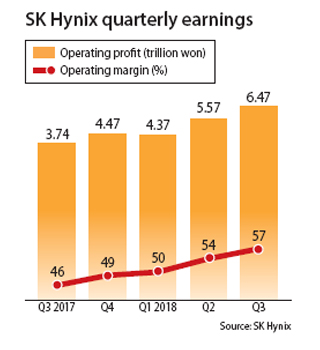 But the world’s second-largest memory chip maker, after Samsung Electronics, offered up a gloomy outlook, saying that weakness in memory chip pricing will continue through the first quarter. The company added in a conference call that, in response to the trend, it would scale down facility investments and production volumes at its factories in Cheongju, North Chungcheong, and Wuxi, China.

The company’s revenue for the three-month period ending in September rose 41 percent year on year to 11.42 trillion won. Operating profit increased 73 percent on year to 6.47 trillion won, while the operating margin stood at 57 percent, up from 46 percent in the same period a year earlier.

“Compared to the previous quarter, revenue and operating profit increased by 10 percent and 16 percent, respectively, which is a result of shipment increases and in spite of slow of DRAM and NAND price increases,” SK Hynix said.

DRAM shipments were up 5 percent on quarter on mobile demand. The average selling price edged up 1 percent over the same period.

Shipments of NAND flash memory picked up 19 percent quarter on quarter after the chip-making unit of the country’s third-largest conglomerate proactively responded to demand for high-density mobile products and beefed up the portion of solid state drives (SSDs) within its portfolio. SSDs accounted for about mid-20 percent of NAND flash revenue in the July-September period. The average NAND flash price fell 10 percent over the three-month period, however.

“The severe DRAM supply shortfall, which has been driving up prices thus far, is easing,” said Lee Myoung-young, vice president and head of corporate support at SK Hynix, during a conference call. “NAND flash prices have been down for three consecutive quarters to levels seen in the first half of 2016. Additional price adjustments are inevitable.”

It is hard to predict the market situation next year, but demand from server companies for artificial intelligence and data processing applications will rebound by fourth quarter, he added.

This year was about spending more on facilities to resolve the supply deficiency problems. But given uncertainties surrounding the supply situation next year, investment plans will now be established for each quarter, Lee said. “Overall spending is expected to shrink next year.”

It remains to be seen whether the so-called supercycle boom in the semiconductor industry responsible for record highs on short supply over the past couple of years is coming to an end or whether the market is in the middle of a temporary adjustment.

Morgan Stanley has repeatedly issued skeptical forecasts, slashing its outlook for the chip sector to cautious in August. Moody’s Investors Service on Oct. 23 upgraded the debt rating of SK Hynix to Baa2 from Baa3 with a stable outlook.