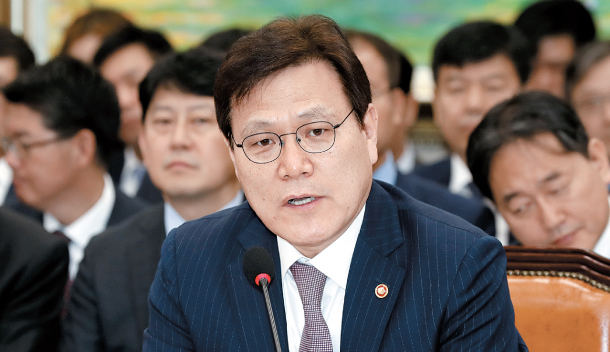 Chairman Choi Jong-ku of the Financial Services Commission speaks during an audit held at the National Assembly in western Seoul on Friday. [YONHAP]

However, Choi Jong-ku, chairman of the FSC, acknowledged that Korean markets are seeing greater volatility than other Asian markets.

“Along with the United States, Asian markets move in a similar manner, but Korea appears to experience somewhat bigger fluctuations,” Choi said during a national audit.

“But there is no problem in market soundness in general.”

Despite that positive message, the Kospi again dipped to a new low for the year on Friday and, at one point, was on the brink of falling below the psychologically-significant 2,000 level.

The Kospi shrank 1.75 percent to close at 2,027.15 compared to the previous trading day, marking the fourth consecutive yearly low.

In early trading, the Kospi tumbled as low as 2008.86 but recovered later on.

Other Asian markets also fell into negative territory amid concerns about the ongoing trade war between China and the United States and rising interest rates in the United States. But as noted by Choi, their losses were less drastic with the main indexes in Japan and China inching down less than 1 percent.

“For any meaningful rebound, either the trade dispute or the pace of the Fed’s rate rises needs to be addressed,” said Lee Eun-taek, an analyst at KB Securities.

Still, the steeper decline in Korea triggered some worries that weak economic indicators were to blame.

An index showing the volatility of Kospi’s major stocks, known as VKOSPI, reached a nine-month high on Friday.

“But these efforts appeared not sufficient,” he continued, “so we are in discussions with related government bodies to respond to market fluctuations.”