South and North Korea on Friday agreed to withdraw 11 guard posts from each side of the demilitarized zone by the end of November as a follow-up to an inter-Korean military agreement signed last month. In removing the guard posts, the militaries of the two Koreas consented to completely demolish guard posts and withdraw all personnel from there.

During a meeting of generals held on the northern side of Panmunjom, the two sides agreed to check the progress of the withdrawal of the guard posts in December as a final step.

After withdrawing the 11 guard posts, which will be done on a test-run basis, the two sides said they will continue discussion on removing the rest along the border.

The Friday talks were attended by a five-member delegation from each side.

The South Korean delegation was led by Major Gen. Kim Do-gyun while his North Korean counterpart was Lt. Gen. An Ik-san.

“Through our meeting today, we reached an agreement on the timetable for withdrawals of 11 guard posts, which was agreed previously that it should be done by the year’s end,” said Gen. Kim in his closing remarks. 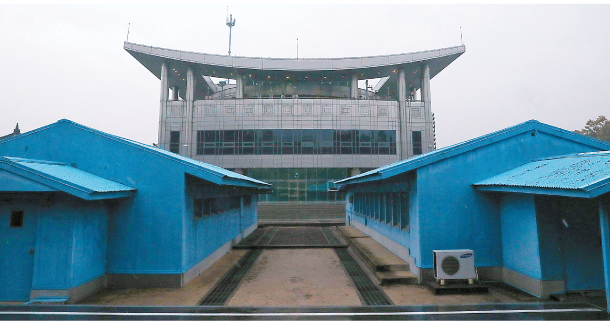 Armed soldiers from the two Koreas were absent from the Joint Security Area Friday. They used to face off against each other every day. Freedom House on the South Korean side is seen in the photo taken from North Korea’s Tongilgak building. [JOINT PRESS CORPS]

Echoing Kim’s positive note, Gen. An of North Korea expressed his satisfaction with the outcome, saying that the meeting Friday “involved deep discussion and led to the consent from each side on military issues.

“We have once again affirmed that the militaries of the two sides could reach agreements that meet the expectations of the Korean people if we respect the wishes of the top leadership,” he continued, referring to South Korean President Moon Jae-in and North Korean leader Kim Jong-un.

In the Pyongyang Declaration signed by Moon and Kim last month, the two agreed they would “expand the cessation of military hostilities in regions of confrontation such as the DMZ” for “fundamental resolution of hostile relations.”

Other than the guard post withdrawals, the military officials reaffirmed many points addressed by the Sept. 19 military agreement signed in the North Korean capital.

“The North and South reaffirmed a [previous] agreement in which the two will halt confrontational activities on land, sea and air effective Nov. 1 and apply new operational rules,” read a press release.

They also agreed to form a joint committee comprised of 10 military, civilian and government officials from each side to conduct research on the Han River estuary in early November to ensure the safe navigation of civilian vessels in the area.

The two sides also agreed to continue preparations by each side in land mine removal and road renovations in the DMZ so that they could launch a joint excavation operation for remains of soldiers killed in the 1950-53 Korean War by next April.

The Unification Ministry, which handles inter-Korean relations, on Friday said the government was still consulting with the North over a specific schedule for joint on-site research on road conditions in North Korea for the railroad reconnection project, noting the two sides had agreed before that the joint survey would take place in late October for the Gyeongui Line and early November for Donghae Line along the East Coast.