Architecture of Gunsan reflects imperial Japan's design influence: A walk through the city provides a look at a time long passed

Architecture of Gunsan reflects imperial Japan's design influence: A walk through the city provides a look at a time long passed 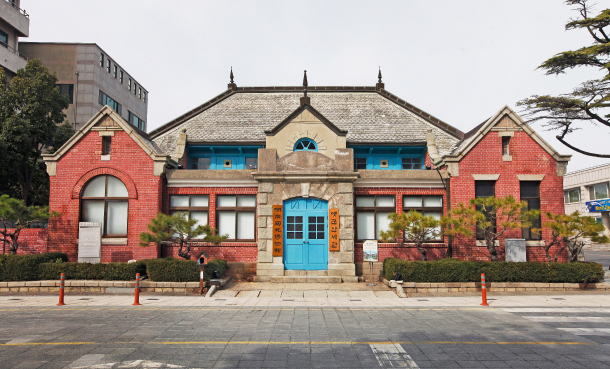 This red brick building with a blue door is the Old Gunsan Customs Office located in the port city of Gunsan, North Jeolla. Built in 1908 by a German architect, it is where large amount of goods, mostly thousands of bags of rice, were processed. [PARK SANG-MOON]

GUNSAN, North Jeolla - Gunsan is located on the south bank of the Geum River, just upstream from the exit to the Yellow Sea. This geographical fortune allowed the city to house one of the country’s most important warehouses to store the grains that people paid as tax in the Goryeo Dynasty (918-1392). In the early Joseon Dynasty (1392-1910), a new warehouse called Gunsanchang was established in the city and became the most important warehouse in Korea’s Honam [Gwangju and Jeolla provinces] region in the 1500s. A large number of traders and fishing boats came in and out of this port city, eventually becoming an important international trade seaport.

However, such geographical attractiveness also made Gunsan prone to numerous outside attacks, eventually becoming one of the key targets of Japan’s aggression against the people of Joseon. The Gunsan Port that opened in 1899 turned into a gateway to ship rice to Japan during its colonial rule (1910-45). The Gunsan Settlement, which was established together with the opening of the port so that foreigners could reside and trade freely and be granted extraterritoriality rights, began to grow under Japanese rule, and the city took on the typical Japanese grid-style structure. During the expansion, the homes and cemeteries of Koreans were forcefully removed and, excluding some land for public use, plots that once belonged to the Koreans were auctioned off.

Despite the unfortunate history of the city, many Koreans acknowledge that the city’s growth and expansion accelerated during the Japanese colonial period. Many early modern buildings were constructed during this period, including government offices and banks, while many businesses opened up alongside the main street known as the Bonjeongtong, or Honmatsi in Japanese. The Japanese who resided in the Gunsan Settlement accumulated great wealth, constructing luxurious Japanese style houses and high-end education facilities. Some of the buildings were recently designated as official historical sites of Korea by the Cultural Heritage Administration. 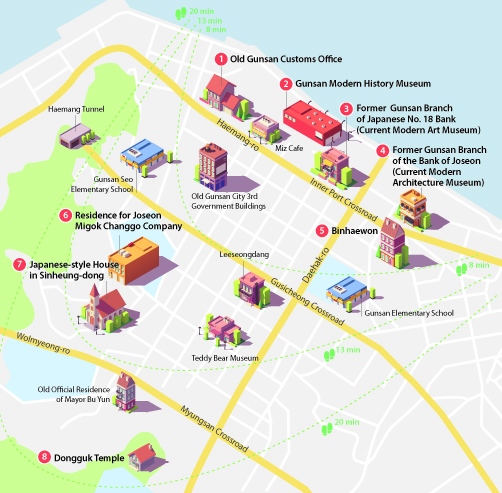 Many of the buildings and houses that were established during the Japanese colonial rule still stand intact here today, with some acting as museums to “correctly educate both Koreans and foreign visitors to the city about Korea’s modern history,” said Park Hong-soon, head of the Gunsan City Government’s Culture and Arts Department.

The city has recently been suffering economically following the closure of the General Motors’ Gunsan manufacturing plants in May that had kept the city a thriving industrial hub. The city, however, is attempting to shed light on its deeply-rooted modern history and attract new visitors by organizing a number of modern history tour programs. The Ministry of Culture, Sports and Tourism also selected Gunsan’s Modern Alleyway Tour as one of this year’s Autumn Tourism Week programs, providing the city with support to hold various on-site programs for visitors to learn more about the deeply embedded history of the city.

The Korea JoongAng Daily took the opportunity to take a trip down to Gunsan and selected eight significant architectural landmarks of Korea’s modern history. All of the sites are reachable on foot, and it takes about four hours to get a thorough view of the entire city. 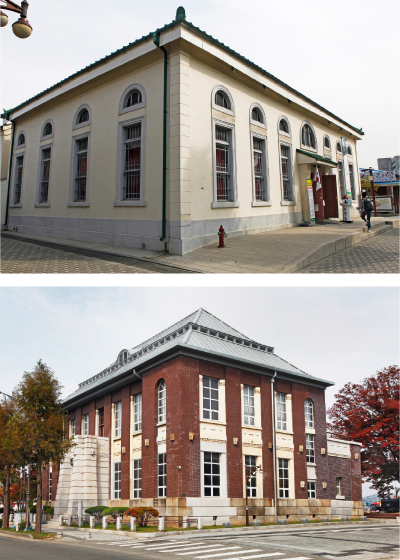 This red brick building with a blue door is probably the port city’s most recognizable building. It used to serve as the main building of the Customs House in Gunsan. Designed by a German architect, this European style building was established in 1908 to carry out duties on goods that came through the Gunsan harbor right beside it. This building is one of the landmarks in the city that was named a state-designated cultural property on Aug. 6. According to the Cultural Heritage Administration, the red bricks of the building were imported from Belgium. Although the exterior of the building is brick, the interior was built using wood and the roof is made of slate and copper sheets.

The building may look pretty on the outside, but it is one of the dark spots of Gunsan, standing as a symbol of the Japanese imperialists that plundered rice in the Honam region.

The Gunsan Modern History Museum's building has no specific historic significance, but what’s inside provides the most valuable information for visitors. Located next to the Old Gunsan Customs Office, this three-story museum allows visitors to learn everything they could ever want to know about the story of Gunsan. The museum’s permanent exhibit starts off with the history of marine trade and how Gunsan became one of the important trading ports on the peninsula. It also attempts to teach visitors about how the people of Gunsan did not simply give up their land to the Japanese invaders, but resisted against them as much as they could.

Admission costs 2,000 won ($1.75) for adults. Visitors can purchase a ticket that grants them access to the museum as well as the Modern Art Museum, the Modern Architecture Museum and the Jinpo Maritime Theme Park for just 3,000 won. The museum is open daily except for the first and third Mondays of the month.

Established in 1907, this white building with a green roof used to be the Gunsan Branch of Japanese No. 18 Bank. The head office of the bank was located in Nagasaki, Japan and the first Korean branch of the bank was built in Incheon in 1890. The Gunsan bank was the seventh branch established in Korea and was built to facilitate the transport of rice produced in Korea to Japan as well as force the sale of land, according to the Gunsan City Government. The building is state-designated Cultural Property No. 372.

The building currently serves as the Modern Art Museum, holding special exhibitions for artists from North Jeolla and Gunsan in the main building while having a permanent exhibition at its annex building that sheds light on Korean independence activist Ahn Jung-geun.

“Although he is not from Gunsan, we thought it is important to inform visitors about Korea’s patriots who fought for the country’s independence,” said Park from the Gunsan City Government. “That is why we dedicated the annex building to Ahn Jung-geun.” The museum is open everyday except Mondays.

This Gunsan Branch of the Bank of Joseon, established in 1922, is regarded as a major financial facility that supported Japan’s colonial domination of Korea during its occupation, aiding Japanese settlers in buying and reclaiming land around Gunsan. The building is said to be designed by a Japanese architect Nakamura Yoshihei, although there are some documents that say an Austrian named Anton Feller contributed to the design.

After liberation, the Bank of Joseon turned into the Bank of Korea and moved its headquarters to Jeonju. Currently it serves as the Modern Architecture Museum. The building is National Registered Cultural Property No. 374.

At far left is the inside of Binhaewon, the Chinese restaurant that was recently registered as a state-designated Cultural Property. Above center, above right and below right show the outside and inside of a Japanese-style house in Sinheung-dong. Below center is Daeungjeon Hall of Dongguk Temple, the last Japanese Buddhist temple in Korea. [PARK SANG-MOON, YONHAP]

If your tour starts in the morning, by the time you finish looking around the Modern Architecture Museum, it’s time for lunch. Binhaewon, a Chinese restaurant located right across from the museum was also designated an official historical site in August.

From the outside, the building looks pretty ordinary, but it’s the inside that makes visitors bring out their cameras.

According to the Cultural Heritage Administration, the building is a rare instance of a restaurant still in business that is a state-designated Cultural Property, and the administration decided to do so as the “building shows the influence of Korea’s ethnic Han Chinese communities that settled in Gunsan and other western port cities in the early modern era.”

Binhaewon opened its doors in the 1950s thanks to a Chinese-Korean named Wang Geun-seok, who still is the owner of the restaurant. The restaurant moved to its current location in 1965 and expanded to its current size in the 1970s. The two-story building is made of reinforced concrete and bricks. Its long hall is decorated with traditional Chinese lamps and the restaurant has been featured in many films including “Tazza” (2006) and “Man in Love” (2013).

It is famous for its mul jjajang. The dish is simply jjajangmyeon, or noodles in black bean paste topped with minced pork and vegetables, but with the addition of water, or mul in Korean, for more soup-like dish.

This house is a Japanese-style building that was built in 1935 and is located in Geum-dong. The neighborhood is home to many Japanese-style houses that visitors can look around, although they won’t be allowed to get a peek inside.

This specific house was built for the company's manager. Although it looks relatively small from the outside, it has six rooms, a garden and a well. As it is privately owned, the interior is not open to the public except for special occasions.

To get a really close look at a Japanese-style residence of the 1930s, this house in Sinheung-dong is a must-visit. The house is empty and visitors can take a look inside the home on Saturdays. Built around 1925, this two-story wooden house was built by Hirotsu Kichisaburo, who ran a small farm in Gunsan during the colonial period. He also served as a member of the autonomous district council for the Japanese residing in the area and was a very influential man in the city.

The house is quite large and is composed of two structures connected together in an L-shape. The first floor has Korean ondol (heated flooring) rooms, a kitchen, dining room and a bathroom while the second floor features Japanese architectural elements such as tatami rooms and tokonoma, a built-in recessed space.

“This house gives a glimpse of the lifestyle of Japanese landowners and their exploitation of Korean farmers during the colonial period,” said Kim Gwang-seo, a guide who is positioned at the house during weekends.

This temple is one of three remaining Japanese Edo-influenced temples and the last Japanese Buddhist temple in Korea. It was founded by Japanese Buddhist monk Woochida in 1913. The temple’s main building, Daeungjeon Hall is beautifully preserved, boasting a steep, 75 degree roof with end tiles that are very unique to Korea. After the liberation in 1945, the temple came to belong to the Jogye Order of Korean Buddhism and has kept its name ever since.