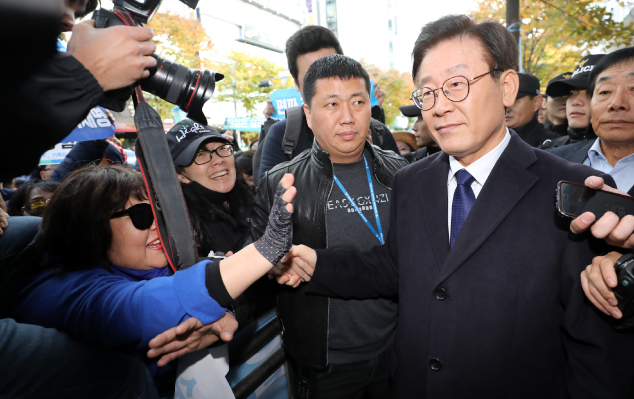 Gyeonggi Gov. Lee Jae-myung greets supporters while on a lunch break from answering police questions at the Bundang Police Precinct on Monday. [YONHAP]

Gyeonggi Gov. Lee Jae-myung stepped into a police office in Bundang on Monday to answer to a host of criminal allegations leveled against him, but not before he delivered a politically-charged proclamation of innocence.

Lee is accused of a litany of crimes, from forcibly admitting his own brother into a mental institution and spreading false information about an extramarital affair with an actress to pressuring companies to pay out around 16 billion won ($14 million) in advertising fees to Seongnam FC, a football club he ran as mayor of Seongnam from 2010 to 2018.

The governor vocally insisted on his innocence on all such allegations to reporters before entering the Bundang Police Station on Monday morning.

“I have never abused my executive authority for personal purposes,” Lee said. “I am sure justice will be done, since there was never a case in which I overstepped the law.”

He also had bitter words for the police pursuing his case, accusing them of exaggerating the claims against him. The governor even hinted that he was facing political pressure from the ruling Moon Jae-in administration on his Facebook page a day earlier. He said the police hadn’t acted in such a way even under the two previous conservative presidencies.

Police say Lee may have abused his power as mayor to confine his older brother into a mental hospital, and then violated election laws when he denied having done so during his gubernatorial run. Lee’s relationship with his older brother, who died in 2016, became the subject of intense controversy after an audio recording surfaced before the local elections in June in which Lee spewed profanities at his brother’s wife.

Perhaps the most lurid accusation Lee faces concerns an alleged affair he had with the actress Kim Boo-sun from 2007 to 2009. The Bareunmirae Party, whose candidate in the Gyeonggi gubernatorial race accused Lee of having the relationship in a series of public debates, sued the governor following the election in June for lying about the affair in those televised appearances.

The governor has since been embroiled in a public exchange with Kim, who attempted to prove her affair with Lee by publicly referring to a birthmark on his body. Lee rebutted this by visiting a hospital on Oct. 16 to prove that he had no such birthmark, which doctors confirmed.

Finally, Lee must also answer to accusations about his ties to organized crime, which concerns donations of up to 16 billion won made by a number of companies to Seongnam FC. The broadcaster SBS’s investigative program “We Want to Know” aired an episode in July that alleged that Seongnam FC received money on Lee’s behalf from a company established by known criminals. In exchange, the company’s president was recognized by the Seongnam city government as a notable CEO and received a tax audit exemptions as a result. This final accusation could result in a corruption charge that could deal a crushing blow to Lee.