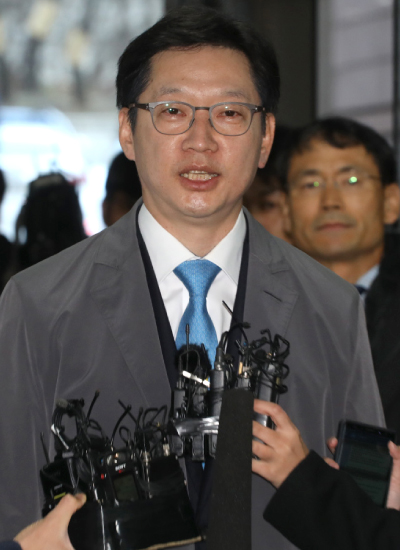 South Gyeongsang Gov. Kim Kyoung-soo on Monday attended the first hearing of the trial over his involvement in an online opinion rigging scandal during last year’s presidential election.

Before stepping into a courtroom at the Seoul Central District Court Monday morning, Kim vowed to faithfully follow legal procedures and said that trial would reveal the truth behind the allegations against him.

“I apologize to the people of South Gyeongsang for causing concern in such a difficult economic situation,” Kim said. “But I promise there will be no delays in provincial governance.”

Kim is accused of colluding with the political blogger Kim Dong-won - better known by his online alias Druking - to mount an online campaign to support President Moon Jae-in’s election bid last year. Kim Dong-won and his associates allegedly used a computer program to post and upvote thousands of comments on social media favorable toward the president.

The prosecution in the governor’s trial is led by Huh Ik-bum, the same special prosecutor who indicted Kim Kyung-soo after a two month probe into the scandal from June to August. Though the investigation uncovered little decisive evidence against the governor, the counsel’s prosecutors nonetheless charged Kim with obstructing the business of Naver, Korea’s largest portal site, for conducting the opinion-rigging campaign on Naver.

Huh’s team also indicted Kim for violating election laws by promising one of Kim Dong-won’s associates the post of consul general in Sendai, Japan, in exchange for their help in the presidential elections as well as his gubernatorial run last June.

Following his successful election in that race, the governor found himself squarely in the special counsel’s crosshairs in a controversial probe that was sometimes accused of blurring the lines between politics and justice. Kim’s position as a major figure in the ruling Democratic Party and a potential presidential contender raised the stakes of the investigation against him, which was wholeheartedly endorsed by opposition parties.

The governor, for his part, has continued to deny the allegations against him, saying he took no part in Kim Dong-won’s crimes. The counsel, however, argues that he gave the blogger and his crew permission to develop the opinion-rigging software based on the governor’s meeting with the group on Nov. 9, 2016, in which they showed him a demonstration of the program.

In Monday’s hearing, the prosecution attempted to prove this by summoning one of Druking’s associates, who allegedly demonstrated the software to Gov. Kim, as its main witness. The witness, identified only by his surname Park, testified that the group would primarily write comments for articles flagged by Kim Kyoung-soo in online conversations with Kim Dong-won. According to Park, the two regularly communicated via text message over what articles would be subject to online manipulation.

The governor’s lawyers responded by casting doubt on Park’s testimony. They presented to the bench a set of notes shared by Kim Dong-won with his associates, including Park. The notes outlined a plan to coordinate their testimonies in court to turn the trial in their favor and against the governor, argued the defense.