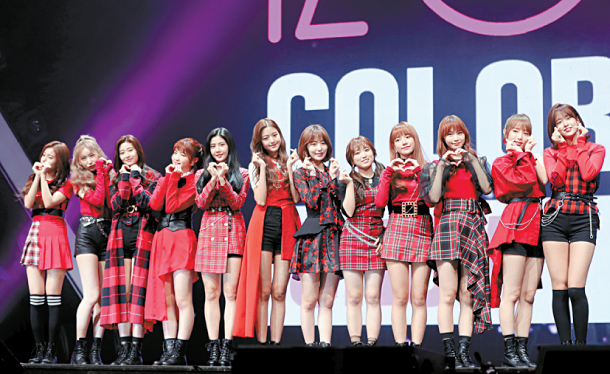 Girl group IZ*ONE’s song “You’re in Love, Right?” off of its debut album “COLOR*IZ” was deemed unfit for broadcast by television network KBS on Tuesday.

According to KBS, the song goes against the Ministry of Culture, Sports and Tourism’s 2004 regulations regarding Japanese pop culture in Korea. According to the regulations, J-pop is banned on national broadcasting channels. J-pop singers, however, are allowed to make appearances on nationally-televised programs.

“You’re in Love, Right?” is a Japanese song written by J-pop girl group AKB48’s producer Akimoto Yasushi. Three of the members of IZ*ONE are members of AKB48 or its off-shoots.

Since before the group’s debut on Monday, they have been surrounded by controversies regarding right-wing Japanese politics. Last Sunday, a person created a petition on the Blue House’s petition board saying that the group should be banned from appearing on public television since some of the members belong to a group that allegedly supports right-wing Japanese politics.

The group was also criticized after appearing on JTBC’s reality program “Idol Room” on Tuesday because member Kang Hye-won expressed that she enjoyed watching the Japanese animated series “Attack on Titan.” The show, originally a manga series, has been criticized by Koreans ever since the author of the manga, Hajime Isayama, uploaded posts supporting Japanese imperialism in 2013.

Despite the controversy, the group’s debut album release has been successful. It topped the iTunes Album Charts in eight countries including Indonesia, Israel and Japan.