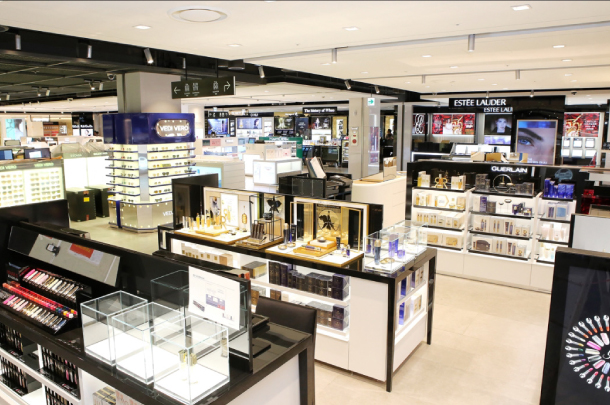 The beauty section at Hyundai Department Store’s duty-free store in Gangnam, southern Seoul. There is a total of 150 beauty brands in this area including local and foreign brands. [HYUNDAI DEPARTMENT STORE GROUP]

The store is located on the eighth to 10th floors of Hyundai Department Store’s Trade Center branch, which is connected to COEX via an underground tunnel. In total, the new duty-free store measures 14,250 square meters (3.5 acres) and houses 420 brands including 40 foreign luxury labels.

Luxury brands will be based on the eight floor, while the ninth floor is reserved for beauty products and fashion stores. The 10th floor will have a more various selection of products from character goods to food like red ginseng and dried seaweed that is popular with foreign duty-free shoppers.

The project is a huge one for Hyundai Department Store, which has been relatively conservative in the last decade regarding business expansions. Other department store rivals Lotte and Shinsegae have already established a stable foothold in the duty-free industry.

“We expect to raise 670 billion won ($588 million) of revenue next year, and to reach one trillion won [in annual revenue] by 2020,” said Hyundai Department Store CEO Hwang Hae-yeon at a press conference held at the venue on Wednesday.

The new addition will be the fourth duty-free store in the Gangnam area, along with Lotte Duty Free stores in the Lotte World Tower in Songpa District and in COEX and the Shinsegae Duty Free near the Express Bus Terminal. Being closer to other duty-free stores has tended to work as an advantage in the past, as tourists, especially those in large groups, can visit all of the different venues in one outing.

In the past, duty-free stores inside Seoul were mainly clustered the North of the river, but the recent shift toward the Gangnam area suggests that a new duty-free destination could develop in the south of the city.

Hwang also expressed confidence in the Gangnam location beside COEX as the operation’s “main differentiation point.”

The venue is located near three high-end hotels, an underground mall, a casino and a convention center that regularly hosts international fairs. SM Town, a well-known destination among K-pop fans that also sells SM Entertainment products, is also nearby.

The launch of Hyundai’s duty-free store comes at a complicated time: Chinese group tours to Korea - which once accounted for 70 percent of local duty free revenue - haven’t fully recovered after the U.S.-led antimissile system Thaad deployment last year. There are mounting concerns that duty-free stores are in fierce competition for commission fees in order to attract Chinese resellers that purchase in bundles.

“There’s excessive competition in the market now - I want it to normalize and we’re going to try to stay away from [contributing to] it,” said Hwang.

“There are many challenges, including regulations in China, but things are getting better. Chinese resellers can’t be ignored at the moment but in the long run, our plan is to focus on attracting ordinary tourists.”