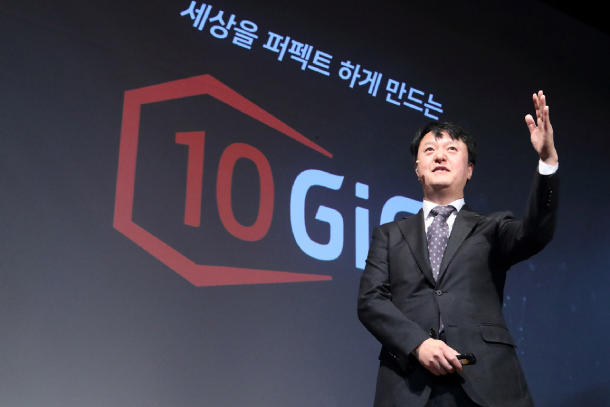 Park Hyun-jin, head of the wire and wireless business unit at KT, speaks during a press conference held Wednesday in Seoul to launch a fixed-line internet with maximum speeds of 10 gigabits per second. [KT]

KT announced Wednesday it will introduce a fixed-line network 10 times faster than its current offerings in Seoul as well as six major Korean cities today.

The launch of Korea’s first home internet with speeds of up to 10 gigabits per second (Gbps) comes about four years after the mobile carrier launched wired internet with 1-Gbps speed.

According to the company, Korea’s largest fixed-line internet service provider, a faster home internet has become a necessity as the number of independent content creators, like YouTubers and dedicated Esports players, has grown explosively.

In a demonstration Wednesday at KT headquarters in Gwanghwamun, central Seoul, the actual download and upload speeds of the new internet service exceeded 8 Gbps whereas the existing internet achieved speeds of less than 1 Gbps. With the new internet, it takes only 30 seconds to download a 33-gigabyte ultra high-definition movie, according to KT. At 1 Gbps, it takes four minutes and 30 seconds.

“You also need to think of the many devices that will be connected to home internet in the future,” said Park Hyun-jin, head of the wire and wireless business unit at KT. “I personally use five internet-powered devices, but by 2021, an average person will have 13 devices connected to the internet.”

According to Park, the connection of numerous devices will slow internet speeds and make a 10-Gbps fixed-line a necessity to maintain tolerable internet speeds on each device.

Faster fixed-line internet will also support the deployment of the high-speed 5G wireless internet nationwide, according to KT.

The so-called backbone is a part of a computer network that connects other networks.

According to KT, its 10-Gbps internet will be able to cover about 60 percent of the country by the early half of next year.

To subscribe to the 10-Gbps internet, it costs 110,000 won ($96) per month, but if users already subscribe to KT for TV services, the monthly fee could be discounted to 77,000 won on a three-year contract basis.

To enable users to get a feel for 10-Gbps internet, KT said it will gradually install the network at 80 Starbucks Reserve shops in Korea and six PC rooms operated by AfreecaTV by this year.