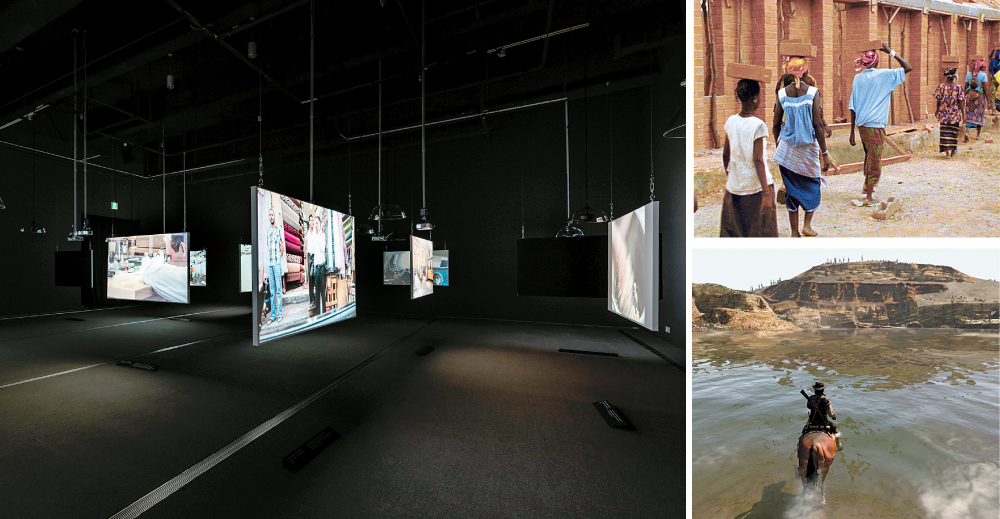 Clockwise from left are German filmmaker and video artist Harun Farocki’s “Labour in a Single Shot,” “Comparison via a Third” and “Parallel I-IV” series, which are on display at the National Museum of Modern and Contemporary Art. Farocki’s biggest private exhibition in Asia will continue throughout April 7. [MMCA]

Harun Farocki is an internationally renowned avant-garde filmmaker and video artist from Germany recognized for addressing subjects as varied as the practices of labor and the production of images. Despite his reputation, however, little is known about the artist in Korea. The fact that there is not a single book that has been translated about him proves Koreans’ long indifference towards the late artist, who died in 2014.

His work has been the subject of major exhibitions at the Museum of Modern Art in New York, the Tate Modern in London and elsewhere. However, only few of Farocki’s works have been introduced in Korea as part of group exhibitions held at the Coreana Museum of Art and Nam June Paik Art Center.

Hoping to make Farocki a more familiar figure to Koreans, the National Museum of Modern and Contemporary Art (MMCA) has launched an exhibit dedicated to the artist. Titled “What Ought to Be Done? Work and Life,” it is the largest private exhibition dedicated to Farocki in Asia.

The exhibition introduces nine of Farocki’s representative works, including “Interface” (1995), his first video work intended to be shown in a gallery, “Labour in a Single Shot” (2011-17) and “Comparison via a Third” (2007).

Many of Farocki’s works were short experimental documentaries that explored contemporary life, and presented a unique perspective on labor, war and technology. He also offered insights into how images are used as a means to shape public ideology, expressing negative views of the violent effects that media and industrial technology have on humanity. All at the same time, Farocki conveyed his hopes about the role of cinema and contemporary art, which he believed will restore reason in an age of anti-rationalism.

“We thought now is the time that we desperately need [to follow the] direction that Farocki pursued throughout his entire life,” said Kim Eun-hee, the curator of the exhibition, during a press event held Oct. 25.

“Labour in a Single Shot” is a set of video installations that captures different scenes of people working around the world in a single continuous and uncut shot. They demonstrate one or two minutes of the seemingly trivial work routines of people without a specific narrative. It was executed by the artist and his wife Antje Ehmann, and she carried it on after his passing.

Other works related to labor are “Workers Leaving the Factory in Eleven Decades” and “Comparison via a Third.”

Leading viewers through eleven decades of people departing a workplace, “Workers Leaving the Factory in Eleven Decades” is a modern recasting of the Lumiere brothers’s work. Beginning with Lumiere’s footage of workers rushing out the factory gate in Lyon, it captures a range of workers coming out of their workplaces over the past decades, demonstrating the geographic dispersal of resources over time. “Comparison via a Third” depicts side-by-side the sharp contrast of working procedures when a brick is made in newly industrializing societies and highly industrialized societies.

Apart from labor, MMCA’s ongoing exhibition also explores Farocki’s “Parallel” (2012-14) series, which analyzes the virtual world of computer graphics. “Parallel I-IV” sheds light on the conjunction between reality and image through the use of computer graphics technology. Farocki refers to characters in the video games as “intermediary beings between the human and the background,” through which he compares the endless limited choices people encounter.

The exhibition is scheduled to run until April 7.