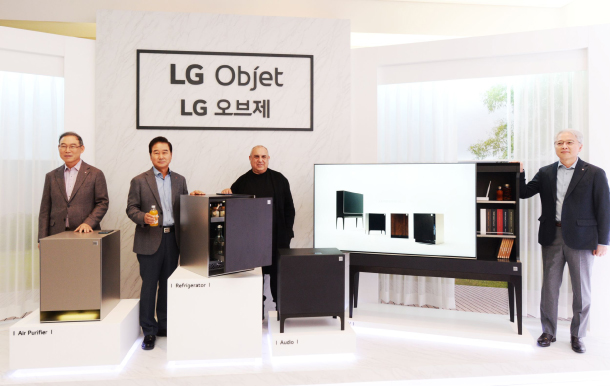 The company rolled out four products under the LG Objet name at a press conference held Thursday in Gangnam District, southern Seoul: a mini refrigerator, an air purifier, a speaker and a television.

“The thing about home electronics is that they are placed mostly in kitchens or living rooms but rarely inside bedrooms,” said Song Dae-hyun, LG’s president for home appliances. “Bedrooms, on the other hand, only have furniture, so in the last few years, we thought about ways to make home electronics coexist in that space.”

All four items are covered with hard wood.

Another way in which LG worked to make the appliances look more like furniture was to reduce the size of external features typical to electronic devices, like buttons or small screens. They are simplified or hidden in less visible areas of the product. An exception is the television, with its 65-inch screen, but LG added a furniture-like touch to it by placing a cabinet behind a sliding television screen.

The fridge and the air purifier won Red Dot and iF design awards. Architect and industrial designer Stefano Giovannoni was involved in the development of the products.

In terms of function, LG utilized technology to make the devices more appropriate for bedrooms.

A compressor is a core component in a refrigerator, and it tends to be noisy. LG Objet’s refrigerator utilizes the type of cooling found in wine cellars to make the product quiet.

For customers using the refrigerator or the air purifier as a bedside table, LG enabled a corner of the top surface to work as a wireless charger for portable devices.

Song said during the press conference that he believes affluent customers in their 50s and 60s with strong purchasing power will be a source of demand as they look for ways to decorate their private spaces.

The refrigerator and the air purifier are priced at 1.99 million won ($1,760); the speaker, 1.49 million won; and the television, 9.99 million won. The products were made available for sale at LG Best Shops starting Thursday.

This is LG’s second high-end home appliances brand after the LG Signature series, introduced in 2016. Apart from sales, the other goal of LG’s premium product expansion is to maintain a leadership in the sector.