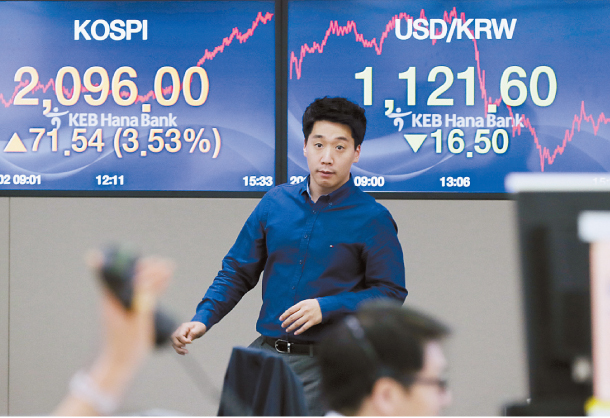 The board at the KEB Hana Bank in central Seoul on Friday shows the market closing the week positively. [YONHAP]

The chief of the country’s central bank warned of further volatility in Korea’s financial markets due to uncertainties abroad after local stock indexes hit a series of recent lows last month.

“We can’t rule out the possibility of more severe fluctuations in the domestic financial markets amid a very high level of external uncertainties,” said Governor Lee Ju-yeol of the Bank of Korea during a meeting with the CEOs of local banks.

The governor acknowledged that Korea’s stock markets experienced steeper declines than other markets.

“There have been concerns that higher capital outflows and market volatilities might lead to another financial crisis, although the growing external risks impacted the market indexes around the world,” Lee said.

Foreign investors in particular led the selloff as they offloaded 4.6 trillion won ($4 billion) worth of shares in October. The benchmark Kospi declined 13.37 percent in October, while the tech and bio-heavy Kosdaq fell 21.11 percent.

Still, the governor noted that the current market instability was concentrated in the equity markets, with the currency and bonds markets relatively stable.

“That is because of large trade surpluses and overall confidence in the Korean economy,” the governor said.

But Lee vowed to stay vigilant in the face of troubled international financial markets and take action if market fluctuations become more pronounced.

“The Bank of Korea will cautiously monitor the changes in and the effects of global markets and make efforts to stabilize the local markets in cooperation with the government, if needed,” he said.

Despite concerns from the governor, the Korean stock markets ended the week on a positive note, with the Kospi gaining the most points in a single day in seven years.

Except for SK Telecom, which fell 1.53 percent, all of the top 10 stocks by market capitalization were up, including market bellwether Samsung Electronics, which rose 4.74 percent, and SK Hynix, up 6.3 percent.

Friday’s recovery was largely driven by foreign investor net buying, which has continued over the last three consecutive trading days.

This was the second consecutive day that the won appreciated against the dollar as foreign investors have become net buyers. Friday’s appreciation was faster than on Thursday’s, when the won went down 1.5 won against the greenback.

The dramatic turnaround of the Kospi, which fell below the 2,000-point psychological barrier recently, was largely the result of growing optimism that a resolution in the U.S. and China trade dispute may be achieved this month.

U.S. President Donald Trump after holding a phone call with Chinese President Xi Jinping on Thursday tweeted that he had a “long and very good conversation” with the Chinese president with a “heavy emphasis” on trade.

“Those discussions are moving along nicely with meetings being scheduled at the G-20 in Argentina.”

The G-20 is scheduled to take place in Buenos Aires Nov.30 through Dec. 1.

Other Asian markets ended the week on a strong note, with the Nikkei 225 up 2.56 percent, the Shanghai Composite Index up 2.7 percent and the Hang Seng Index gaining 4.16 percent.

However, some market experts advise against hasty judgment as U.S. mid-term elections are next week.