Left: Mido Photography Studio owner Kang Il-woong poses in front of his camera, which he has used for over 50 years. His studio is located near Sinchon Station. Right: Ryu Sang-joon, left, and his brother Ryu Sang-nam, right, craft a new farming tool at their smithy in Eunpyeong District, northern Seoul. [LIM SUN-YOUNG SEOUL METROPOLITAN GOVERMENT]

Seoul is honoring its most venerable shops.

The Seoul Metropolitan Government selected 26 stores in three Seoul districts (Yongsan, Mapo, Seodaemun and Eunpyeong) with long histories and branded them with as “ohraegage” on Sept. 14.

This program first started recognizing businesses in Seoul in September 2017.

In Korean, the term ohraegage means a wish for the store to stay around for a long time. The branded stores had to “pass strict examination,” according to the metropolitan government, before they were awarded with the title. The Seoul Metropolitan Government plans to create promotional leaflets and brochures on the stores’ behalf to help promote them.

Only stores that have been open for 30 years or more and have been managed by a family for more than two generations could compete to become an ohraegage. Upon entering, an evaluation committee consisting of Seoul residents, experts and foreigners will evaluate the store based on its potential as a tourist attraction and its friendly service. After undergoing six rigorous evaluation stages, 26 stores were selected.
Six out of the 26 stores are located in Yongsan District, eight are in the Mapo District, ten are located in Seodaemun District and two are located in Eunpyeong District. The JoongAng Ilbo interviewed the owners of five stores.

One of the stores visited is Hanshin Onggi, a pottery store located in Yongsan District, western Seoul. Onggi are Korean traditional jars that are extensively used as either tableware or storage containers. The store is located near the pottery wall on the outskirts of the U.S. military base in Yongsan District. According to the owner, Shin Yeon-geun, she has opened her store every single day since she started running it in 1967.

“I don’t want customers to come only to be disappointed that the store is closed,” said Shin. The store does not only sell onggi but also offers a wide selection of pottery. There are over 100 different items to choose from, including pots, ceramics and teacups, all of which are Korean handmade. “Nowadays, customers come to purchase small pots for decoration purposes. One out of every three customers is a foreign tourist,” said Shin. 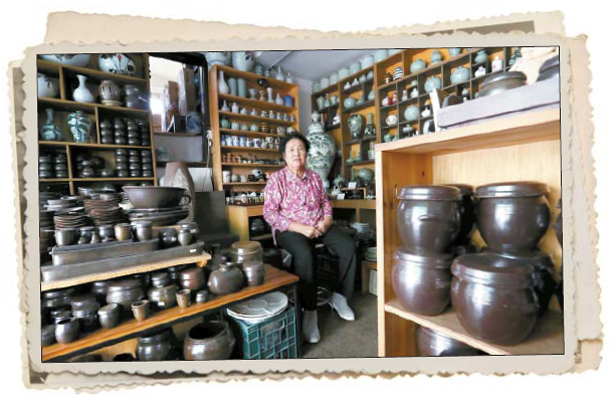 Shin Yeon-geun is the owner of Hanshin Onggi, a pottery store in Yongsan District. Her store was recently honored as an ohraegage by the Seoul Metropolitan Government. [WOO SANG-HO]

Shin said she opened the store in 1967 with the money that she saved from selling onggi from a handcart for 10 years with her husband. In 1982, when her husband passed away, she managed the store on her own while raising her six children. Shin said that she intentionally created the pottery wall to make sure that her product was well displayed to any potential customers. The U.S. military base did not see her store as a nuisance, but instead appreciated it for its decorative quality. “Some days I don’t even sell one product, but I am still thankful for every single customer that stops by,” said Shin.

Three brothers — Choi Dae-ro, Choi Dae-han and Choi Dae-woong — run the Gyeonggi Rice Cake Shop in Mapo District, western Seoul. The store, which first opened in 1996, was passed on to the brothers by their father. The siblings work together to create high quality rice cakes while continuously honing their skills. Choi Dae-han was even branded as a “rice cake master craftsman” by the Gyeonggi Provincial Government. Choi said that he used to wake up at three in the morning to learn how to make rice cakes and use different ingredients from his father. He said his early morning sessions are the reason for his success.

The three brothers say that they inherited their father’s stubbornness when it came to the quality of their rice cakes. “When the price of rice cake materials surged in 2008, my father still insisted on using good quality rice and grains that were grown domestically. He stringently believed that good ingredients determine the taste of our product,” said Choi.

When brothers select the red beans used for the rice cakes, they travel all across Korea to sample red beans from different regions before choosing the best-quality beans for that year.

In Seodaemun District, a wide variety of shops such as a photography studios, bookstores, food shops and school uniform tailors made it onto the lists.

Mido Photography Studio is about a three-minute walk from Sinchon Station. The studio, which opened in 1967, became well-known for specializing in photos for people preparing to become flight attendants in the early 2000s. The pictures of people who became flight attendants decorate the walls of the studio. The owner, Kang Il-woong, introduces the wall as the “Hall of Fame.” “As many as 120 people come by each day to have their pictures taken,” said Kang.

Kang credits his self-developed special camera lenses as the reason for the studio’s popularity. “I took the same principle that is responsible for creating the illusion that the subject is skinnier and applied it to my lenses,” said Kang.

65 years have passed since Kang first started taking pictures. After receiving a camera from his father when he was in middle school, Kang started dreaming about becoming a photographer. Kang says that there was a noticeable decrease in the number of people that came to have their photos taken, as cell phones with cameras have become common. Despite that, Kang manages his store because he firmly believes that ID photos should enhance the individual qualities of a person while looking realistic. This, according to Kang, cannot be achieved with a cell phone.

“Sometimes customers come by and ask for an excessive amount of photoshopping to be done to their pictures. I have to try to convince them that the photos need to be as natural as possible,” said Kang.

Dok Dabang, an old-fashioned coffee shop that plays music, was a hot spot for university students in the 1970s and 1980s. The shop was frequented by artists like novelist Sung Suk-jae and poet Ki Hyung-do. The coffee shop closed in 2005, but re-opened in the same location in 2013. The store is currently managed by Son Young-duk, the grandchild of the original owner, Kim Jung-hee.

Peter Pan bakery in Seodaemun District, which opened in 1987, celebrated its 31st anniversary by becoming an ohraegage. The bakery focuses on blending tradition and modernity. The baked goods are made with high-quality ingredients imported from France. The products appeal to a younger generation with their unique product names like “baby bottom” and “bread that was stolen by Jean Valjean.”

The two shops located in Eunpyeong District that were selected to become ohraegages are smithies. One smithy is managed by brothers Ryu Sang-joon and Ryu Sang-nam. Ryu Sang-joon first opened his own smithy in 1976 and managed it alone until his brother decided to join him.

Bulwang smithy is run by Park Kyung-won and his son Park Sang-bum. The two have been working alongside each other for 26 years.
“The moral that I learned from my father is only produce a limited number of products each day. If you start to produce more products each day, then the time you spend on each product, and eventually the quality, decreases significantly,” said Park.