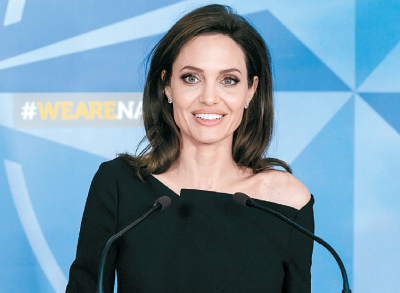 Angelina Jolie, one of the world’s biggest movie stars and a United Nations High Commissioner for Refugee (UNHCR) special envoy, was spotted in Seoul multiple times over the weekend along with two of her sons as they enjoyed Korean barbecue and toured a local university campus.

According to multiple international and local media outlets, Jolie is in Korea on an official visit as part of her UNHCR duties. In her down time, she was seen with her 17-year-old son Maddox and 14-year-old son Pax on a tour of Yonsei University in Seodaemun District, northwestern Seoul, on Saturday. They were also seen in photos posted to social media walking around through Samcheong-dong in Jongno District, central Seoul, and enjoying dinner in the neighborhood.

Ilgan Sports, an affiliate of the Korea JoongAng Daily, reported that Maddox has shown interest in Korean pop culture and music.

It is said that his interests are not limited to pop music but also extends to other types of Korean culture, and he has considered applying to college in Korea. Maddox has also spent time studying Korean.