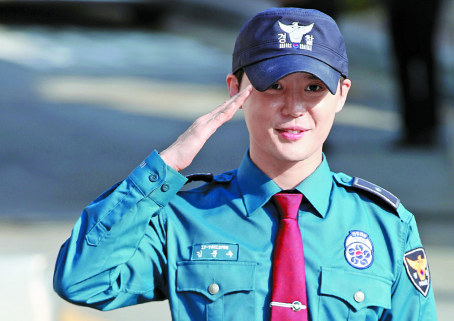 Kim Jun-su of boy band JYJ has been discharged from military duty after completing his 21 months as a conscripted officer with the Suwon police.

On Monday morning, Kim, also known as Xia Junsu, greeted his fans and the press in front of the Gyeonggi Nambu Provincial Police Agency. Around 500 fans waited in front of the police department for Kim, according to Yonhap News.

“I have learnt a lot during the past one year and nine months,” he said. “I was able to watch [and experience] how hard the policemen were working on site. As a citizen, I will become a [better] person who contributes to the community.”

All able-bodied Korean men are required to serve in the military for about two years.

To celebrate Kim’s discharge from the military, fans made donations totaling around 19 million won ($17,000) in Kim’s name to Good Neighbors, a Korean-based NGO that fights children’s hunger around the world.

The singer debuted in 2004 as a member of boy band TVXQ. However, he left the group along with members Park Yoo-chun and Kim Jae-joong in 2010 to form the group JYJ. Since then, he has also pursued a career as a solo artist, starring in musicals including “Death Note” (2015), “Dracula” (2016), and “Dorian Gray” (2016). Kim will be holding a private fan meeting on Wednesday, according to his agency C-JeS Entertainment.