Stores may be putting shoppers before carts

Stores may be putting shoppers before carts 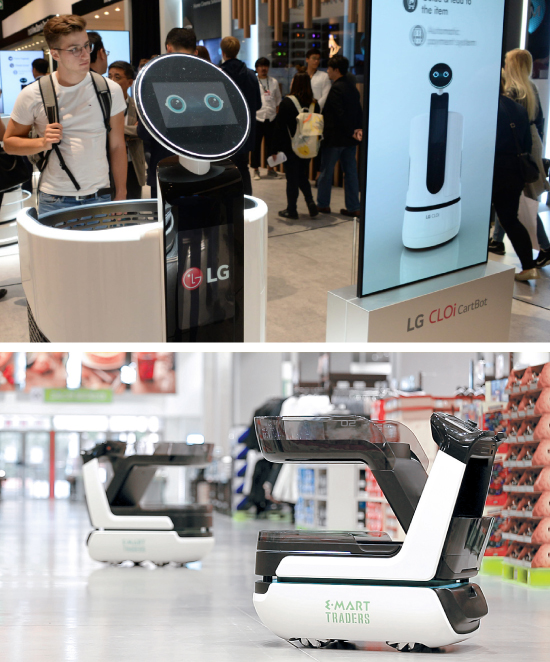 LG Electronics and discount chain Emart joined forces on Monday to develop a self-driving shopping cart that can follow customers through the stores’ aisles.

The companies hope to test run their Smart Cart in the first half of next year. Its main function will be tailing a customer inside a store while avoiding obstacles.

LG and Emart representatives signed an agreement at the discount chain’s headquarters in Seongsu-dong, eastern Seoul, on Monday. The deal combines LG’s know-how in robots with Emart’s understanding of brick-and-mortar retailing.

“Apart from developing the Smart Cart, Emart and LG Electronics will conduct research other ways to apply state-of-art technology to retail,” Emart said in a statement.

The Smart Cart is not a completely new realm for either company.

In April, Emart conducted a test run of two autonomous carts dubbed “eli” at the supermarket Emart Traders in the Starfield Hanam branch in Gyeonggi.

Developed by Emart’s internal retail tech team, the cart was capable of following a specific customer and maintaining a distance of around 1.5 meters (4.9 feet). A bar code reader allowed customers to pay for items with the cart itself.

Emart says that eli was just a “concept model” to test various functions that could be adopted in the future. Mass production was deemed too expensive.

The self-driving cart development project with LG Electronics will be aimed to develop a less costly model fit for mass production and wide use. The new version is supposed to concentrate on what Emart sees as the fundamental function of grocery carts of the future - following a customer.

“Our tests [of eli] found that the most important function that most affects the convenience of our customers is to follow them smoothly, to be compact, to recognize a customer correctly and avoid obstacles - that’s what we’re going to focus on for the commercialized model,” said an Emart spokesman.

If the test runs next year go well, the two companies will look into mass production.

LG Electronics has also been exploring robots since last year.

The company showed a prototype of a cart robot from its robot brand LG CLOi at the annual IFA Berlin tech fair held in September 2017. Its guide robot is currently working at Incheon International Airport while at some Paris Baguette branches, a CLOi Home robot is suggesting products to customers.