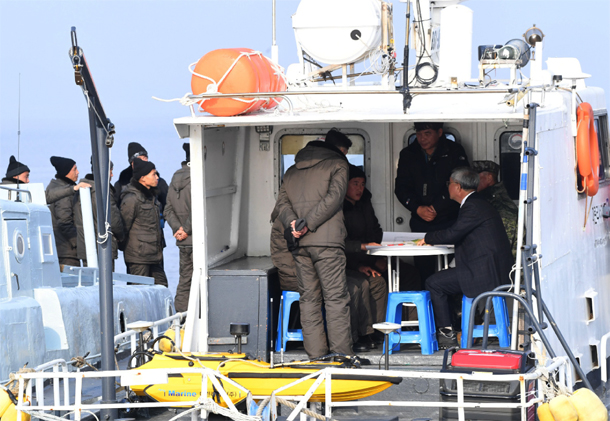 Members of an inter-Korean investigation team meet at an estuary of the Han River in Gyodong Island in Ganghwa County, Incheon, on Monday. The two countries kicked off a joint survey this week aimed at “peaceful use” of the waterway, which for decades has been off-limits to civilians. [YONHAP]

Both Koreas launched a team of military officials and waterway experts on Monday to survey the estuaries of the Han and Imjin rivers along the west coast in hopes of using the area for future projects.

The survey is a follow-up to an inter-Korean military pact signed on Sept. 19 during the third South-North summit, which went into effect last Thursday. Both Koreas agreed in a high-level meeting between generals on Oct. 26 to start the survey in early November.

The joint survey of the estuaries of the Han and Imjin rivers, which for decades have been off-limits to civilians, will be the first time that both Koreas will examine the waterways together.

Seoul’s Ministry of National Defense said in a statement Monday that the armistice agreement allows for the free movement for civilian vessels within the area.

In most cases, however, local authorities restricted their sailing due to fear of military clashes between the South and North.

A spokesman from the ministry said that the estuary of the Han River doesn’t have a military demarcation line separating the two countries, making it “highly possible” for an accidental clash to occur.

The source said the government hopes the waterways transform into a place that both Koreas can “peacefully” use.

According to the ministry, the joint survey team is composed of 20 members, 10 from each side, including military officials and waterway experts. By the end of the year, they will head out on six South Korean vessels to carry out their investigation.

It runs from the northeastern tip of the South Korean city of Gimpo in Gyeonggi to the southwestern tip of Gyodong Island in Ganghwa County, Incheon, and from North Korea’s Imhan-ri, Panmun County, Kaesong to Haenam-ri, Yonan County, South Hwanghae Province.

The Defense Ministry said the study group planned to examine the depth of the waterways from the vessels to the riverbed and at which level boats can safely sail within the areas.

Both Koreas agreed not to engage in any action or words that may provoke the other side, or keep with them any explosive materials, guns or weapons during the months-long investigation, according to the South’s Defense Ministry.

The two Koreas also agreed to allow the South Korean vessels temporarily stop nearest place, in whichever country, if “urgent situations” such as a natural disaster occurs. The host country will provide assistance.

The South’s Defense Ministry said the project will hopefully provide navigation information to both countries and allow civilians free movement in the future.

Both Koreas had initially agreed to hold a joint survey of the Imjin and Han estuaries in October 2007 at the second inter-Korean summit during the South’s Roh Moo-hyun administration. The initiative soon lost momentum after bilateral relations began to sour.