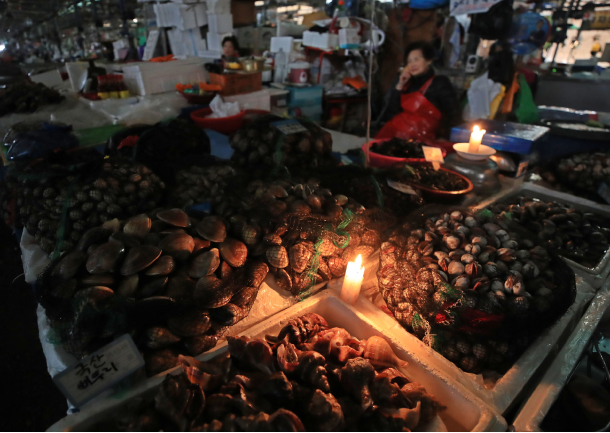 Vendors work by candlelight at the traditional market in Noryangjin, southern Seoul, after being ordered to evict and move into new stalls in an adjacent modern building. The National Federation of Fisheries Cooperatives, which oversees the market, cut off power and water to the old building Monday. [YONHAP]

Merchants illegally operating at the old site of Seoul’s largest seafood market are struggling to stay in business after power and water were shut off Monday.

The National Federation of Fisheries Cooperatives, commonly known as Suhyup, followed through on an ultimatum issued Oct. 30 to cut power and water to all merchants who have not moved into a modern building next door in Noryangjin, southern Seoul.

The Noryangjin fish market, which grew into one of the country’s largest wholesale seafood markets since it opened in 1971, is currently divided in two - a semi-outdoors traditional market where merchants have sold fresh fish for decades, and a much brighter market in an adjacent modern building.

Ever since the new structure was opened in March 2016 as part of a local renovation project, Suhyup has made repeated attempts to close down the traditional market and force merchants to move indoors, saying the old facilities were dilapidated and unhygienic.

But vendors at the traditional market have resisted the move, claiming that rent was too high and space too constrained in the new building.

The conflict escalated into a legal battle that reached the Supreme Court, which ruled in favor of the federation in August. Four times, Suhyup sent in temporary hires and police to evict the vendors, which provoked scuffles and ultimately failed.

Eventually Suhyup threatened to cut off power and fresh water to the old building. “The previous four attempts failed as a result of violent group actions by merchant unions,” said a Suhyup spokesman. “We, therefore, concluded that eviction notices were insufficient to normalize the situation at the fish market.”

Monday saw another bitter clash when vendors from the old market stormed the offices of the federation in the new building, with plenty of finger-pointing and insults traded between the two sides.

At the old building, other vendors tried pouring seawater into their fish tanks to keep their products fresh, while dead fish littered the ground.

“Dozens of crabs have already died but I am pouring in the water to save what little I have left,” said a 53-year-old crab vendor surnamed Park. “Because products like king crabs are expensive, I have lost around 10 million won ($8,948).”

Some merchants complained that they did not receive Suhyup’s ultimatum for the power and water cuts, despite the federation’s insistence that notices were sent to all vendors in the old building.

According to Suhyup, approximately 260 merchants still operate illegally in the old building, where fish are not only sold wholesale but also prepared on the spot for hungry visitors.

It is unclear whether regular operations will be sustainable for these vendors with these new measures.

Yoon Hyun-joo, a leader of a union for the merchants in the old building, said it would report the federation’s actions to the police and file complaints with the city government.

“Operations look difficult, though we will do our best to minimize the damage,” Yoon said. “We will do everything possible to defend our livelihoods.”