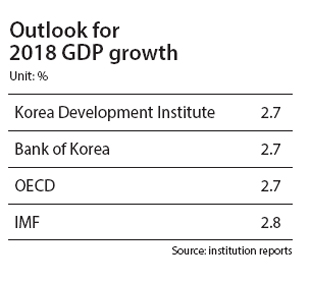 A research institute cut its forecast for Korean economic growth Tuesday as slower investment and a sluggish job market take their toll.

The state-run Korea Development Institute (KDI) revised its estimate for 2018 gross domestic product (GDP) growth from 2.9 percent to 2.7 percent, in line with the latest forecast from the central bank. Conditions are expected to remain much the same next year, with the KDI revising its estimate for 2019 to 2.6 percent from 2.7 percent.

The adjustment follows a series of similar announcements from other organizations, including the International Monetary Fund (IMF) and the Organization for Economic Cooperation and Development (OECD). The IMF projects Korea’s growth will come in at 2.8 percent in 2018, while the OECD is predicting 2.7 percent growth.

The institute cited a number of factors in its revision, including weak investment and the slow growth of private spending.

“On the demand side, slower investment will continue to exacerbate the situation, while consumer spending will also slow,” the KDI said.

The manufacturing sector will be a drag on growth amid a slowdown in global trade stemming from a trade dispute between the United States and China, according to the KDI. The construction industry will continue to shrink.

Construction investment plunged 8.6 percent in the third quarter, the worst figure since the first quarter of 1999, when the country was reeling from the global financial meltdown. Compared to the previous quarter, it was down 6.4 percent.

Asia’s fourth largest economy registered 0.6 percent growth in the third quarter. The rate is the same as in the second quarter and the lowest rate since the fourth quarter of last year. Government spending intended to stimulate the economy and robust exports failed to balance a dramatic decline in construction and equipment investment.

With risks increasing, the KDI is suggesting that the central bank maintain an accommodative monetary policy to boost the economy with lower interest rates. The suggestion highlights the dilemma facing BOK.

The central bank is tempted to raise its benchmark rate to ease financial imbalances and keep up with rising rates in the United States and other major economies.

On the other hand, the country faces downside risks, including the U.S. ? China row, a sluggish job market and volatile equity markets.

The BOK will make its next decision on rates on Nov. 30.