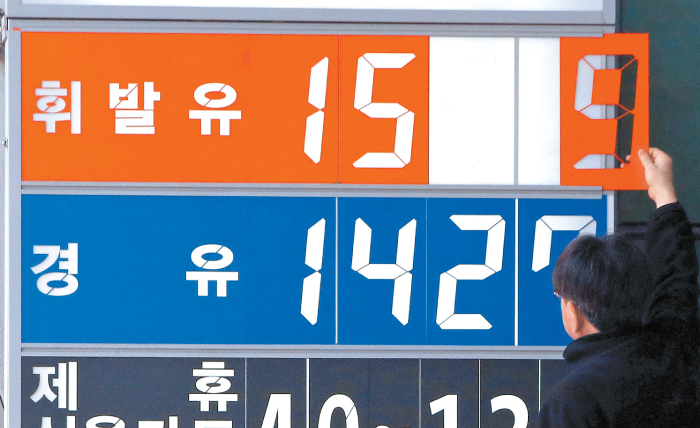 A worker changes the price information at a gas station in Yeongdeungpo District, western Seoul, on Tuesday in the wake of a fuel tax cut. The station reduced the gasoline price from 1,714 won (＄1.53) a liter to 1,591 won and the diesel price from 1,514 won to 1,427 won. [YONHAP]

A cut in tax on transport fuel went into effect Tuesday, prompting a wave of car owners searching for gas stations offering the best pump prices.

Other fuels - diesel and liquefied petroleum gas - saw drops of more than 1 percent. 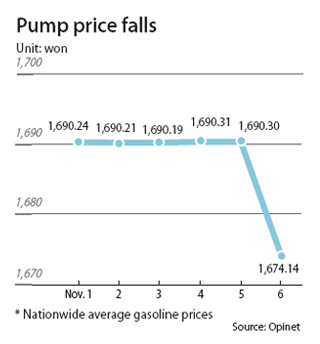 The best place to find those gas stations was a website run by the Korea National Oil Corporation, Opinet, which crashed and was down for hours due to the spike in traffic. Its frozen homepage had an apology on it.

Such directly-run gas stations account for only about 10 percent of gas stations in Korea, posing a true challenge to price-conscious car owners.

The Korea National Oil Corporation said that more stations will lower prices down the road.

“It will take some time for gas operators to make a transition,” said a source at the state-run oil company.

“Gas stations need to use up all the fuel they have before the tax cut is implemented,” the source said. And during that period, the price difference won’t be that noticeable.”

According to Opinet on Tuesday, a gas station in Changwon, South Gyeongsang had the cheapest gasoline in Korea at 1,475 won per liter. The most expensive was found in Jung District in central Seoul, 2,328 won per liter.

Cheongju in North Chungcheong had the highest number of gas stations offering lower prices. Six stations were selling gasoline in the 1,400 won range.