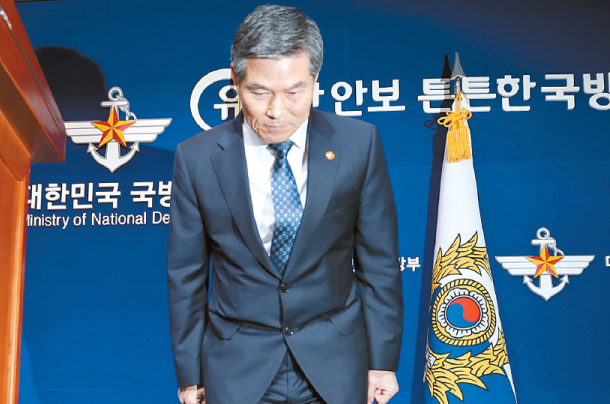 Defense Minister Jeong Kyeong-doo bows his head to apologize over sexual assaults by troops during their crackdown on a pro-democracy uprising in Gwangju in 1980 during a press conference at the ministry’s building in Seoul on Wednesday. [YONHAP]

Defense Minister Jeong Kyeong-doo apologized Wednesday for sexual assaults by Korean soldiers during their brutal crackdown on the 1980 pro-democracy uprising in Gwangju.

During a nationally televised press conference, Jeong pledged to spare no efforts to console the victims and make the utmost efforts to restore their honor and prevent any more sexual assaults. He stressed that the military exists to support the people, not those in power. “On behalf of the government and military, I bow my head and offer my words of apology for the unspeakably deep scars and pains on innocent female victims,” Jeong said. “We will spare no efforts to provide staff and other resources to restore the honor of Gwangju citizens who rose up to resist the then military-backed government and regain democracy, and to console the women who had their normal lives stolen [by the troops],” he added.

His apology came a week after a government fact-finding team announced that it found 17 cases of sexual assault committed by troops enforcing martial law during their crackdown in Gwangju in 1980.

The probe team consisted of officials from the ministries of gender equality and defense and the National Human Rights Commission. It was launched in June as part of government efforts to shed light on the alleged wrongdoings by the military during the crackdown. The Gwangju uprising came in the wake of a military coup in December 1979, through which then-Army Gen. Chun Doo Hwan seized power. Chun’s military staged a campaign to quash the uprising that killed hundreds.