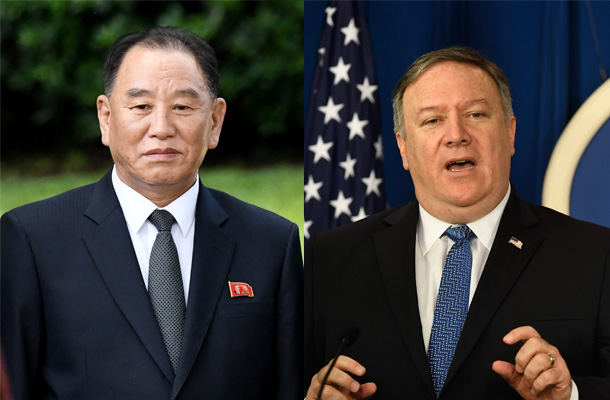 A day after announcing that U.S. Secretary of State Mike Pompeo and a top North Korean official would hold talks in New York this week, the U.S. Department of State abruptly said Wednesday the meeting has been postponed to an unspecified later date.

The high-level North-U.S. talks had been set to take place in New York Thursday, a follow-up to Pompeo’s fourth visit to Pyongyang last month. The meeting between Pompeo and Kim Yong-chol, vice chairman of the Central Committee of the North’s ruling Workers’ Party, would have been an opportunity to continue denuclearization talks and discuss a second summit between U.S. President Donald Trump and North Korean leader Kim Jong-un.

Heather Nauert, spokesperson for the U.S. State Department, said in a statement around midnight Tuesday that “Pompeo’s meeting with officials from the Democratic People’s Republic of Korea, scheduled for this week in New York, will now take place at a later date.”

She did not specify why the talks had been canceled or if they had been rescheduled, only saying, “We will reconvene when our respective schedules permit.”

“Ongoing conversations continue to take place,” Nauert said in the statement, which came amid U.S. midterm elections. “The United States remains focused on fulfilling the commitments agreed to by President Trump and Chairman Kim at the Singapore summit in June.”

The State Department on Monday announced that Pompeo would travel to New York with Stephen Biegun, the U.S. special representative for North Korea, to meet Kim Yong-chol.

Biegun’s presence had led to speculation that North Korean Vice Foreign Minister Choe Son-hui would also travel to New York. Kim Jong-un and Pompeo during their Oct. 7 talks in Pyongyang, along with discussing a potential second North-U.S. summit, agreed to hold working-level talks, but Choe has yet to hold such talks with Biegun.

The State Department had said Monday that the two sides “will discuss making progress on all four pillars” of the Singapore summit, referring to a four-point joint statement signed by Kim Jong-un and Trump on June 12, and achieving the “final, fully verified denuclearization” of North Korea.

Despite Washington’s sudden announcement, Seoul officials were not too worried about what it meant to future North-U.S. denuclearization negotiations.

A senior South Korean Foreign Ministry official familiar with the talks said Wednesday, “Our government had been looking forward to the North-U.S. high-level talks to bring about actual measures for the denuclearization and establishment of permanent peace on the Korean Peninsula, hence we think it is regrettable that they are not taking place.”

He added that Seoul “looks forward to the talks being rescheduled at an early date.”

“There is no need to imbue excessive meaning to the postponement of the talks,” the official added. “We have to see it as a process toward the achieving of denuclearization and establishment of a peace regime on the Korean Peninsula, and there are situations where planned meetings are postponed.”

The U.S. State Department statement, the official noted, “has a calm tone,” adding that the South Korean government “will continue to try to play a role in enabling momentum in dialogue.”

Washington briefed Seoul about the postponement ahead of the announcement, this official added.

This is not the first time Washington has abruptly postponed a planned meeting with North Korean officials.

On Aug. 23, Pompeo announced a trip to Pyongyang with his new special envoy for North Korea, Biegun, which Trump canceled the next day over Twitter, blaming a lack of “sufficient progress” in denuclearization, and also alluding to the trade war with China.

Similarly, Trump, through a public letter on May 24, canceled his first summit with Kim Jong-un, which was in the works for June 12 in Singapore, blaming “open hostility” in Pyongyang’s rhetoric. It was Kim Yong-chol’s visit to New York at the end of May and visit to the White House in Washington that helped put the summit back on track.

Kim Eui-kyeom, the Blue House spokesman, said in a briefing Wednesday, “I don’t believe that the postponement [of the high-level talks] means that the North-U.S. negotiations have become null or lost momentum or direction.”

Diplomatic sources indicated that the North Korean side asked to postpone the talks.

Kim Yong-chol had been booked for a flight from Beijing to New York on Wednesday. While Kim was expected to have arrived in Beijing Tuesday, his flight from Pyongyang to Beijing was suddenly canceled that day.

Pompeo was scheduled to attend a top-level U.S.-China diplomatic and security dialogue in Washington on Friday.