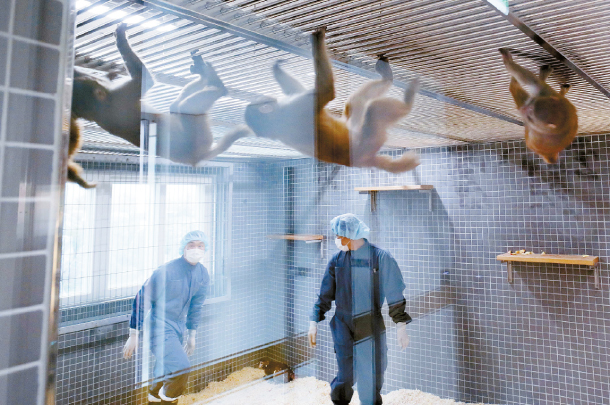 Monkeys play in the Primate Resource Center one day before the official launch of the government-funded monkey housing facility for biomedical research in Jeongeup, North Jeolla, on Monday. [KIM SUNG-TAE]

JEONGEUP, North Jeolla - A rhesus monkey rides on a swing hanging from the wall. It looks up toward a sliver of sunlight streaming in from outside and hurries toward the source. Dozens of other monkeys chase one another around a huge castle-like structure.

Over 550 rhesus monkeys and crab-eating macaques live at the Primate Resource Center in Jeongeup, North Jeolla, which opened on Tuesday after four years of construction.

The center is operated by the government-funded Korea Research Institute of Bioscience & Biotechnology. Its mission is to house non-human primates before transferring them to domestic research institutes and universities that will experiment on them for biomedical research.

The facilities are fully heated with around fifteen monkeys sharing one 27-square-meter room.

According to the Ministry of Agriculture, Food and Rural Affairs, a total of 3,082,259 animals were used for clinical research in Korea last year, including 2,403 non-human primates.

Monkeys, especially rhesus monkeys and crab-eating macaques, are in high demand in the biomedical sector because of their genetic similarity to humans.

These monkeys have a near-94 percent DNA overlap with humans and are sensitive to the same illnesses, making them integral to preclinical trials when drugs are tested on animals before being used on humans.

“We plan to increase the number of primates in our facilities from the current 550 to 1,090 by the end of the year,” said Kim Ji-su, head of the center. “We hope to have 3,000 by 2025, and supply them to universities and research centers.”

Strengthening national sovereignty over biological resources was an important consideration that pushed Korea to invest 18.5 billion won ($16.5 million) in building the facility.

Under the international Nagoya Protocol on Access and Benefit-sharing (ABS), which Korea ratified last August, countries that use another’s biological resources to conduct research for food, medicine and cosmetics are obligated to pay royalties or share research results.

Currently, China provides over 90 percent of the global supply of non-human primates for biomedical research. With Korea being a latecomer in drug development, scientists are worried that the country will never gain competitiveness in drug innovation if they use foreign animals.

“The National Primate Center, which housed 400 non-human primates since 2005 in Ochang, North Chungcheong, was not enough to meet domestic demand,” said Kim. “Furthermore, it’s becoming increasingly challenging to bring in monkeys for testing from abroad due to international restrictions.”

“We are hoping that the establishment of the National Primate Center as well as other research centers of specific pathogen-free animals will energize the biomedical industry by giving a boost to preclinical research,” said Kim Jang-seong, president of the Korea Research Institute of Bioscience & Biotechnology.