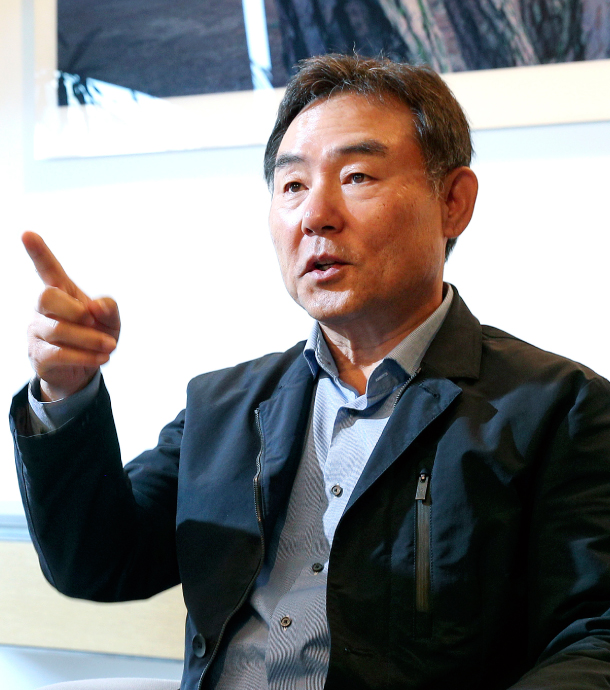 Byeon Yang-ho, Former head of financial policy at the Ministry of Strategy and Finance [LIM HYUN-DONG]

Byeon Yang-ho is one of very few former non-ministerial economic policy makers that the average Korean knows by name.

In the early 2000s, Kim served in very prominent government roles, including the head of financial policy at the Ministry of Strategy and Finance and the commissioner of Korea Financial Intelligence Unit (KoFIU), the anti-money laundering arm of the Financial Services Commission.
Kim, however, is probably the best known for being accused of accepting bribes from U.S. buyout firm Lone Star and allowing it to purchase Korea Exchange Bank for less than it was worth while working at the Finance Ministry in 2003.

Though Byeon was declared innocent in 2010 after years of battling in court, the incident persuaded him to leave the political scene in 2005 and set up Vogo Investment Group, Korea’s first private equity firm.

“I helped politicians because I wanted to materialize my ideas. I helped them on the condition that I won’t take on any public positions,” Byeon said, standing by his decision to stay away from the public sector.

The JoongAng Ilbo sat down with Byeon on Oct. 31 to hear his thoughts on the current administration’s economic policies at his VIG Partners office in Jung District, central Seoul.

Q. Economic indicators are negative and stocks have been volatile. What’s your assessment of the Korean economy today?

A. My foreign friends tell me that they are no longer interested in investing in Korea. Our economy is withering away. But looking at our potential growth rate, I disagree that we have to accept 2-percent annual growth as the new normal.

Our potential growth rate has been low for a number of years. The administrations of former Presidents Lee Myung-bak and Park Geun-hye are somewhat responsible for not making structural improvements. The economy actually got worse under this administration, however, as companies became discouraged. But if we revise our economic system, we should be able to experience annual growth rates of around 4 percent, like the United States.

Naysayers argue that while President Moon Jae-in’s goals of fair competition and income-led and innovative growth are sound, his strategies and policies are faulty. What’s your opinion?

This administration is the first to base its economic policy on fairness and social welfare.

Income-led growth is a social welfare policy. But the administration created confusion over the term when it could’ve just phrased it as expanding the social safety net.

Fairness and innovation is the right direction. I call what the government refers to as innovative growth as economic liberalization. The administration’s goals coincide with my emphasis on fairness, freedom and social welfare.

The administration’s policies are not harmonized well and conflict with each other, however. There is no wheel alignment.
Income-led growth cancels out economic liberalization. The government shouldn’t intimidate companies from economic activities while it claims to support fair competition.

The government has to harmonize its strategies to achieve all three goals. It doesn’t make sense to divide the realms of responsibility between different officials. But now, Deputy Prime Minister for the Economy Kim Dong-yeon is responsible for innovation while Fair Trade Commission Chairman Kim Sang-jo is responsible for fair competition and Blue House policy chief Jang Ha-sung for income-led growth.

What is your opinion on income-led growth?

It is undeniable that a higher minimum wage distorts distribution of resources. Income should be raised in consideration of productivity.
I like that the government is trying to help people in need. The current policies are trying to change the rules of the game so that they’re more favorable to them. But the result is that low-income earners are not receiving the full scope of benefits while others are hindered in their growth.

We need to help high-income earners continue to do well so that we can distribute their taxes to low-income earners. Only then will the economy improve.

If you change the rules in favor of people in need, it undermines the economy’s dynamism and skews the distribution of resources. It’s a good idea to punish gapjil (abuse of power), but the government shouldn’t crack down on companies for making money.
In Korea, we form a new policy every time something bad happens. The government needs to set standards and rules and apply them fairly.

What is your idea of equality?

First and foremost, everyone has to be equal under the law. The government can reform chaebol and enforce the stewardship code to prevent a few major shareholders from having it their way. We need to help the board of directors do their jobs.
The government also needs to continue pushing for equal pay for equal work to address any imbalances in the labor market. We can even consider giving tax breaks to companies that follow these principles.

How should the government pursue economic liberalization?

Liberalization of the economy will naturally lead to innovation. People will become creative and dynamic if they are free to pursue economic activities without fear.

As former Finance Minister Lee Hun-jai said, we have to make the economic scene into a playground, creating an endorphin rush in all the players.

The economy cannot be energized if companies continue to be restricted with so many barriers.

Though some regulations regarding internet-only banks and the data economy may have relaxed, there is still a long way to go. This is a country that doesn’t allow Uber. It’s a miracle that we have survived.

We need to allow businesses that operate in Sweden, Singapore and China to operate here as well. We need to even go so far as to reprimand government officials who refuse to allow certain businesses though they’re doing well in other countries.
Jobs will be created only if there’s work to do. Jobs will be created when we give freedom to businesses. Countries all across the world know this and have seen the number of jobs rise when there is flexibility.

Are there dangers to pursuing income-led growth?

Dramatically raising minimum wage to boost household income is a very antimarket behavior. We have to increase industrial productivity and allow wages to rise naturally.

The government is investing in creating more public and temporary jobs to address the employment crisis without thoroughly planning it out.
Anything that is funded with public subsidies becomes the government’s vested interest. Government-funded projects will be difficult to change in the future, hindering innovation.

What is your idea of a social safety net?

Instead of supporting a specific type of industry or company, the government has to directly support individuals who have lost their jobs.
The government says it will invest in innovative businesses, but how can it when it doesn’t even know technology?

I know the limits of government officials’ abilities because I’ve been there.

The government should simplify social welfare programs and make the process for qualifying for them transparent. It should also focus on guaranteeing basic livelihoods, as well as guiding access to health care, education and child care.

What else do you think should be done?

Not much will change if we just fix a thing or two. We need to put fairness, freedom and welfare all into one package and solve the problem from there.