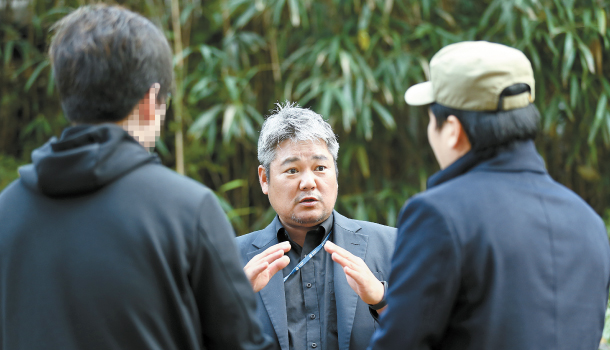 On Oct. 25, three Seoul Metro employees share their perspectives on the Seoul Metro nepotism scandal. Manager Kwak Yong-gi, middle, was the only employee who agreed to show his name and face. Lee Sung-won, right, only revealed his name. [LIM HYUN-DONG]

Seoul Metro, a public corporation run by the Seoul Metropolitan Government, is currently reeling from a nepotism scandal.

The corporation operates Seoul Metro lines No. 1 through 8, which around 10 million people take on a daily basis.

Suspicions started to grow when 108 among the 1,285 workers promoted earlier this year from long-term contract positions to full-time positions were found to be family members of existing employees. The possibility that they might have had inside information about the transition from their relatives did not sit well with the public.

The Seoul Metro building in Seongdong District, eastern Seoul, has a gloomy atmosphere. Near a bench, a small group of employees were discussing the affair, their expressions stitched with worry.

“Most of the employees here work hard for the public. However, these past few weeks, it feels like we are all being punished as a whole because of possible wrongdoing by some,” said one employee.

Across the road from the main building is an annex that belongs to the Seoul Metro. On the day of the visit, interviews for open positions were being held on the third floor. More than 30,000 people applied for the open jobs at Seoul Metro. The final competition rate for the open positions averaged 65.9 to 1. For a civil engineering position, there were 277 applicants for the job. Positions that were easily obtained by some are coveted by many others. In order to hear from voices inside Seoul Metro, the JoongAng Ilbo contacted three employees currently working at the company.

These employees filed a case with the Constitutional Court against Seoul Mayor Park Won-soon and Seoul Metro CEO Kim Tae-ho in February over the worker-status transition scandal. Kwak Yong-gi, the head of the group who filed the lawsuit, Lee Seong-won and another worker surnamed Kim were all hired through an official recruitment process. Together, they revealed the problems in the transition process.

Kwak first joined the company as a level-six employee. It took him 24 years to become a level-five employee because of the constantly changing promotion system. Lee was part of the first batch of employees recruited after the 1997 Asian financial crisis. In Lee’s case, he was required to have a Toeic score and two licenses related to the field he was applying for. He then had to pass a company-issued exam, an English exam and then an aptitude test before finally got the job.

Below is an excerpt from interview the JoongAng Ilbo conducted with the three Seoul Metro employees.

Q. The Seoul Metro is a coveted workplace for many. What are your thoughts on that?

A. It was a surprise when, in 2017, we realized that there was a significant number of newly-recruited employees who originally worked for Samsung before quitting their job to come work for Seoul Metro. You would think that they wouldn’t come to work for public corporations because of the high salary that Samsung was paying them, but that wasn’t the case. Apparently, a secure job is more valuable than a higher salary.

There are even people who studied abroad or have graduated from prestigious universities in Seoul among our newly recruited employees. Some even gave up their positions at international corporations that were paying them 20 million to 30 million won more per year. A few workers who graduated from KAIST were furious about how unfair and irrational the transition process was, they and actually moved on to other public corporations.

Why did you decide to file a constitutional case?

When I first heard that Seoul Metro was planning to upgrade long-term contract workers to the permanent payroll in March without even going through the standard evaluation process, I was furious. Park was asking for public corporations to upgrade all long-term contract workers to permanent employees without giving financial aid to the corporations, which were going to see a fiscal deficit due to the sudden increase in labor cost. The whole process was messed up from the start.

The transition, which was forced without even allowing the union to vote about it, resulted in a total of 2.8 billion won in financial losses. However, once these people are promoted, the financial deficit will increase. It could eventually get to the point where it poses a real threat to the business. It would be too late to blame Park then, because he won’t be in office.

Public corporations follow a total wage system. According to the Ministry of the Interior and Safety, wage increases should be kept below 3.5 percent per annum. However, because the number of employees on the permanent payroll suddenly increased to 15,000, the wages that each worker receives have decreased significantly. Most employees on permanent payroll have seen little or no wage increase, and promotion has become harder to achieve. The transition will eventually pose a threat to employees who have earned their position here.

When did you hear about the alleged nepotism?

After a young man died while working to fix a platform door at Guui Station in May 2016, Seoul Metro took over Eunsung PSD, a contractor in charge of fixing platform doors for Seoul Metro. Kim was, at the time, employed by Eunsung PSD. In the process, the number of available positions for repair service increased. There was a rumor that relatives of employees of Seoul Metro were included in the list of the newly hired.

How did the transition from long-term contract workers to the permanent payroll actually occur?

After the accident at Guui Station, a group of civic activists were commissioned to look into the working conditions of the contracted workers. The group mostly consisted of the National Federation of Democratic Labor Unions or non-profit organizations that support Mayor Park Won-soon. After the investigation, a roadmap for Seoul Metro to take over all its repair service contractors and eventually change all positions to the permanent payroll was planned out. When the roadmap was revealed in June of 2016, employees put two and two together and figured out that if you were employed as a contract worker [in the repair service sector], it was only a matter of time before you were upgraded to the permanent payroll.

Do you believe that news about the transition was leaked before it actually happened?

What’s suspicious is that, at the time, the recruitment period for long-term contract workers was very short. It happened twice, once in September 2016 and then again in December 2016, each only taking a maximum of ten days. Isn’t this evidence enough that the people hired at the time had inside information about the transition?

Who was in charge of the transition process?

We believe that the Seoul Metropolitan Government and National Federation of Democratic Labor Union are responsible for this transition. Even though short-term safety workers were upgraded to long-term contracts [after the Kim incident], they consistently demanded that [repair service workers] be transitioned to the permanent payroll. Demanding such change was irrational because [the safety workers] task force was already increased, as were their yearly salaries. If this was open recruitment, there wouldn’t have been any doubt about their qualifications because there would be a number of examinations and tests to prove it.

What were some things that were bit odd during this process?

Among the employees who transitioned into permanent positions, very few actually worked for Eunsung PSD. The majority were new recruits from September 2016 and December 2016. Since there was an interview that the possible candidate then needed to go through, there is no way we can say with absolute certainty that opinions from other employees in Seoul Metro were not reflected in the selection process.

The three argued against recent criticism that employees who got their jobs through open recruitment and who oppose the transition are just another group of people who are unwilling to give up their rights. All three said that, “We do not wish to take away the rights of contract workers in order to ensure our own [rights]. However, Article 11 in the Constitution should be interpreted as relative equality rather than absolute equality. In other words, equality should be evident in the process rather than in the result.”