Yet another twist in the Team Kim curling saga

Yet another twist in the Team Kim curling saga 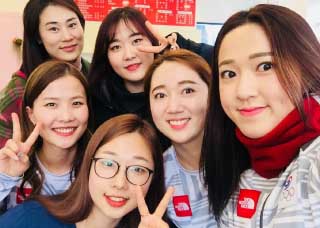 The Korean women’s curling team’s historic silver at the 2018 PyeongChang Winter Olympics raised the profile of the little-known event in Korea, but it also cast a spotlight on the bitter conflict and distrust that have come to define the sport here.

Until last week, Team Kim’s failures and struggles after the Games were thought to be due to the ongoing conflict between the Korean Curling Federation (KCF) and the team’s coach Kim Min-jung and her father Kim Kyung-doo, who originally brought the sport to Korea.
Last week, Team Kim broke their silence on the issues to tell a very different story.

In a letter to the Korea Sport & Olympic Committee (KSOC), Team Kim claimed that they had been exploited and mistreated by Kim Min-jung, her father Kim Kyung-doo and her husband, Korean mixed doubles head coach Jang Ban-seok.

“We got to this position with the help of former KCF vice president Kim Kyung-doo, head coaches Kim Min-jung and Jang Ban-seok,” Team Kim stated in the letter submitted to KSOC president Lee Kee-heung. “However, starting at some point, we were being used for their personal benefit and have been suffering.”

The letter stated that Team Kim wanted a new coach.

The team, comprised of skip Kim Eun-jung, Kim Yeong-mi, Kim Seon-yeong, Kim Kyeong-ae and Kim Cho-hee, won the silver at PyeongChang in what is still considered one of the biggest upsets of the Games. Team Kim’s letter gave five different reasons to support their argument that they received unfair treatment. First, they stated that the coaches used the team for personal gain.

“During the 2017 national team qualifier, they tried to switch the members of the team by replacing Kim Cho-hee with Kim Min-jung,” the letter stated. “They forced Kim Cho-hee to compete in the mixed doubles team qualifier.”

The players also complained in the letter about Kim Min-jung’s lack of coaching ability. According to the players, she barely showed up to practice and regularly tried to change the position of the players.

“For a while, we’ve been training without a head coach,” the letter said. “Recently, we were told to make unreasonable position changes, intentional absences in competitions and were forced to follow directions. We need a coach who can lead us and can provide an environment where we can feel comfortable training.”

Not only that, the team said that they wanted to train and compete in tournaments but weren’t allowed to.

“We were told well in advance not to compete in the 2018-19 national team qualifier held in August,” Team Kim stated. “So we didn’t have any proper training. Regardless of the development of Korean curling, we just couldn’t erase the thought that we were being used in the conflict with the KCF.”

The letter also said that Kim Eun-jung had been receiving unfair treatment since she got married in July.

The players also said that prize money was unfairly distributed.

“Since 2015, we’ve competed in a lot of curling tour events around the world and we had good results,” the letter stated. “We believe that just in 2015, we won about 60 million won [$53,000] in prize money and we won more in other events, but we never saw the prize money.”

Once the letter was released, Jang argued back, saying that all of the complaints in the letter weren’t true.

“The announcement and the schedule for the national team trial showed up late and we had to make the decision at the last minute,” Jang said. “In terms of prize money, only the account was named under former vice president Kim Kyung-doo, but it was shared by all the players. The prize money was used for competing in tournaments and for foreign coach expenses.”

To prove his argument, Jang released a screen capture of the message the team had regarding the prize money distribution in July and an official document that had the players’ signatures on which proves that the players reviewed the prize money distribution.
KSOC announced on Friday that it will hold a joint audit regarding the case with the sports ministry.