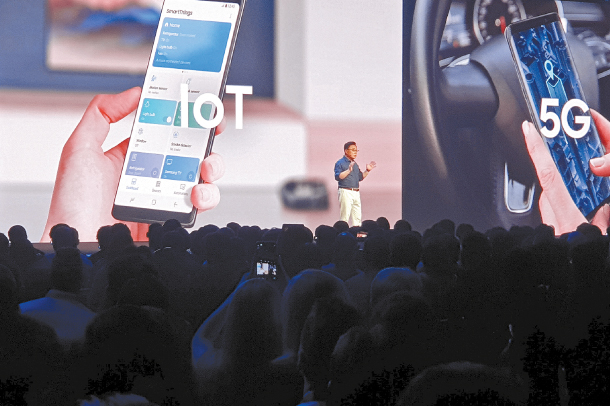 Koh Dong-jin, Samsung Electronics president of the IT and Mobile Communications division, delivers a keynote speech at the Samsung developer conference. [SAMSUNG ELECTRONICS]

Samsung Electronics will make its foldable smartphone available by the first half of 2019, with initial shipments estimated at least at 1 million units, according to Koh Dong-jin, president of the IT and Mobile Communications division at the company.

The comments were made Thursday in San Francisco on the day two of the Samsung Developer Conference, where he discussed the rollout of the new flagship phone with considerable confidence.

“We will definitely introduce the phone before the end of the first quarter next year, although I cannot pin down the date at this moment,” he said. “And we will maintain the line each year.”

His comments indicate that Samsung will be adding foldables to its existing two flagship lines, the Galaxy S - released most recently in February - and the Galaxy Note - released in the fall. But the foldables will be released in a limited number of countries, including Korea and the United States. Koh added that Samsung has yet to confirm the name of the lineup.

Given Samsung’s status as the No.1 smartphone vendor in the world and the fact that its flagship models sell at least 1 million units, Samsung is gearing up to churn out over 1 million foldables from the outset “if the market reaction is positive,” he added.

Koh’s meeting with reporters came a day after Samsung introduced the foldable phone. The company demonstrated what it calls the “Infinity Flex Display,” which measures 7.3 inches diagonally when the phone is open like a book. The screen is slightly larger than the largest smartphone screen and slightly smaller than those of a conventional tablet PCs.

The company has so far declined to provide additional specifications, including thickness, weight and the battery power.

“We showcased the display to show off Samsung having reached the stage of commercializing the device,” he told reporters. “We have overcome several barriers, such as making the central hinge through the screen invisible. What remains to be done is working on the user interface to make it more concrete.”

He went on to say that Samsung distributed the foldable device to developers before the event so that they could help in designing the best-possible user experience.

Beginning with foldables, Samsung is getting ready to revolutionize smartphone display form factors - to rollables as well as stretchables.

“As much as foldables will have a huge technological impact, so will rollables and stretchables. That’s why we are studying them,” he said. “But the entire workforce is devoted to foldables at present.”

Samsung has been grappling with declining sales and revenue from smartphone business. Operating profit for the division during the third quarter fell 29.8 percent year on year to 2.22 trillion won ($1.96 billion), while revenue slid 10 percent to 24.91 trillion won over the same period.

Koh mentioned 5G connectivity, artificial intelligence and the Internet of Things as breakthrough technologies that will help Samsung compete.

“While we have been maintaining leadership with 4G over the past decade, 5G, AI, IoT and augmented reality will offer a new opportunity in 2019.”

He added that foldables will achieve another leap when such technologies become reality and are combined with the device.

“Next year will be the 10th anniversary of Galaxy smartphones, and it’s very meaningful to me,” he said. “We will be coming up with an impressive Galaxy S10 as well.”