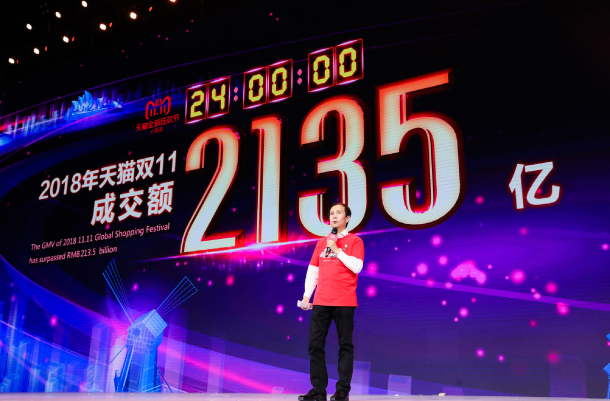 Since 2009, Chinese retail giant Alibaba Group has transformed Singles’ Day, which falls on Nov. 11, into an online shopping festival with large discounts offered for 24 hours.

Other ecommerce giants like JD.com soon followed suit, making Singles’ Day into a Chinese version of Black Friday, although much bigger.

At Alibaba, the number of transactions on Nov. 11 has steadily increased since the event began in 2009.

Despite concerns that the ongoing trade war between the United States and China may have put a break on the income growth of middle-class Chinese consumers this year, Singles’ Day once again broke records.

Chinese shoppers purchased a total of 213.5 billion yuan ($30.6 billion), worth of goods on Sunday, a 27 percent surge from last year’s record. The year-on-year growth rate was slower than last year’s 39.3 percent.

Over 40 percent of shoppers made purchases from international brands, said Alibaba.

Among the countries that sold products to Chinese customers on Sunday, Korea ranked third after Japan and the United States.

Korea placed at No. 3 on the list in 2016, but fell two ranks last year after the deployment of the U.S.-led terminal high altitude area defense (Thaad) antimissile system. The incident soured relations between the two countries and provoked a boycott movement against domestic brands in China.

The exact volume of Korean goods purchased on Sunday was not disclosed, but it was evident that the shopping spree had an impact on local companies, as some of them reported record-breaking figures on Monday.

The company sold 5 million yuan worth of instant noodles at ecommerce website Taobao on Sunday. This was a 25-percent increase compared to last year’s Singles’ Day and 10 times the average sales made at the Chinese ecommerce website per day.

The No. 1 best seller for Nongshim was a multipack of its eight most famous noodle brands, including Shin Ramyun, Neoguri and Kimchi Ramyun.

“We organized huge promotional events ahead of Singles’ Day, as well as collaborating with [social media influencers in China] to air live videos of cooking Shin Ramyun,” the company said.

Based on sales records, the fashion group focused on presenting a wide array of outerwear like coats and jackets. A padded jacket from its kid’s brand, Paw in Paw, sold over 20,000 units during Singles’ Day.

Although LG did not disclose the entire sales volume, the company spokesman said that “this year has set a record for Singles’ Day.”

Rival Amorepacific unexpectedly set positive records as well. The company has been struggling after it lost Chinese consumers in the Thaad row. On Sunday, it generated 37 percent more sales compared to Nov. 11 last year. Several products from brands like Sulwhasoo and Laneige that were prepared for the Singles’ Day promotion sold out.