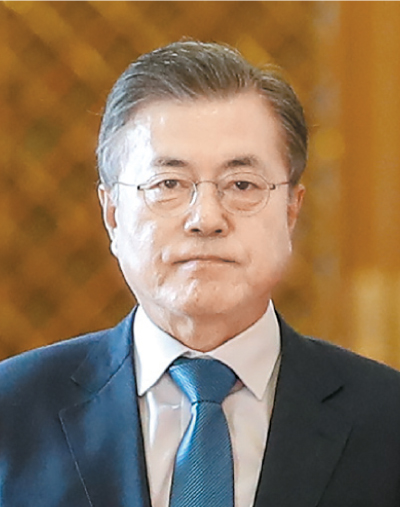 President Moon Jae-in cleared his schedule on Monday to prepare for a six-day overseas trip to Asian nations starting Tuesday during which he will continue championing his peace initiative aimed at inducing North Korea to completely denuclearize.

Monday is when Moon usually presides over a weekly senior secretariat meeting during which he delivers an opening speech to comment on a variety of national and diplomatic affairs.

But Moon did have his weekly luncheon with Prime Minister Lee Nak-yon, a meeting that many see as a sign of growing trust Lee has from the president. Recent polls put Lee ahead of other ruling party lawmakers as a potential presidential nominee for the ruling Democratic Party in the 2022 election.

Speculation that Lee enjoys high trust from the president has grown recently, especially after Moon named Hong Nam-ki, who held the position of chief of the Office for Government Policy Coordination under the Prime Minister’s Office, and Kim Su-hyun, senior presidential secretary for social affairs, to replace Finance Minister Kim Dong-yeon and chief policy maker Jang Ha-sung on Friday.

The fact Moon appointed Hong, who worked under Lee until the appointment, as finance minister has fueled speculation that Lee’s stature within the administration is growing.

Lee, a former journalist, impressed the public with his calm demeanor when grilled by opposition lawmakers during parliamentary interpellation sessions in which cabinet members have to answer questions from lawmakers on the Assembly floor.

Some video clips of Lee answering critical questions in an eloquent manner have gone viral online.

In a poll by Realmeter last month of 2,506 adults nationwide, Lee was the most favored presidential contender from the liberal field, which encompasses the ruling Democratic Party and minor opposition Justice Party for the 2022 election.

In the poll, conducted from Oct. 29 through Nov. 2, Lee received an 18.9 percent approval rating, followed by Gyeonggi Gov. Lee Jae-myung with 11.3 percent.

On his six-day overseas trip starting Tuesday, Moon will be in Singapore from Tuesday through Friday to attend the 20th Association of Southeast Asian Nations (Asean)-Korea summit, the 21st Asean Plus Three summit (which includes Korea, Japan and China) and the 13th East Asia Summit. Moon will attend the Asia-Pacific Economic Cooperation (APEC) summit in Papua New Guinea on Saturday and Sunday.

On the sidelines of the meetings, Moon will have a summit with President Vladimir Putin of Russia and Prime Minister Scott Morrison of Australia. The Blue House also said it is coordinating with the United States to arrange a meeting with U.S. Vice President Mike Pence in Singapore.

Pence will be attending the Asean summit in place of U.S. President Donald Trump. Seoul and Beijing are also discussing a possible summit meeting between Moon and Chinese President Xi Jinping during the APEC summit in the island nation.

One foreign leader Moon is unlikely to have a summit with is Prime Minister Shinzo Abe of Japan due to the strain in bilateral relations caused by the Korean Supreme Court’s order that Japanese companies compensate workers conscripted during the colonial rule of the Korean Peninsula from 1910 through 1945.

A senior Blue House official told reporters last week on the condition of anonymity that it was “rather difficult” to arrange a summit between Moon and Abe at this time and expressed regret over Tokyo’s criticisms of the South Korean government for the court ruling.

The court ruling, delivered on Oct. 30, ordered Japan’s Nippon Steel & Sumitomo Metal to pay 100 million won ($87,845) in compensation to each of four Korean victims of forced labor during Japanese colonial rule of the Korean Peninsula, which ran for 35 years from 1910.

The ruling drew immediate backlash from Japan, which claims all compensations issues in relation to its 35-year colonial rule were settled with the 1965 Korea-Japan Claims Agreement.

Since the ruling, Japanese officials have not shied away from expressing disgruntlement, with Abe calling it “not acceptable according to international law.”