Through Nov. 25: “Weather” is a multi-media exhibition featuring works that have been influenced by the different weather conditions in places we see in our everyday lives, from a sunny day at the beach to a snowy landscape somewhere up north.

Colorful photographs await visitors, with special installations in between the sections to reenact nature’s wonders within the museum walls: the staircase decorated with fluffy cotton clouds, a hallway of mist that allows visitors to feel as if they’re walking through fog and a dark walkway with the sounds of rain tapping gently at the window.

Through Nov. 30: Jang Seung-eop (1843-1897) was one of the greatest painters of the Joseon Dynasty and is believed to have pioneered the contemporary painting genre in Korea. Despite having no proper artistic education, his natural gift for creating a sensual aesthetic on the canvas has led him to be remembered today as both a master and a revolutionary painter. Kansong Art and Culture Foundation’s latest exhibition at the Dongdaemun Design Plaza allows visitors to really get to know the painter through many of his original works.

Through Dec. 16: The retrospective on Yun Hyong-keun (1928-2007) features his famous paintings hovering between Western abstract painting and East Asian ink calligraphy. In addition to his paintings are drawings and materials that reveal little-known aspects of the well-known painter who belonged to the 1970s and ‘80s movement of dansaekhwa, or Korean monochrome paintings.

The exhibition features a reproduction of Yun’s actual atelier, which includes works by his teacher and his father-in-law, Kim Whanki (1913-1974), and by American minimalist Donald Judd. Yun and Judd respected and bought each other’s works, the museum said. 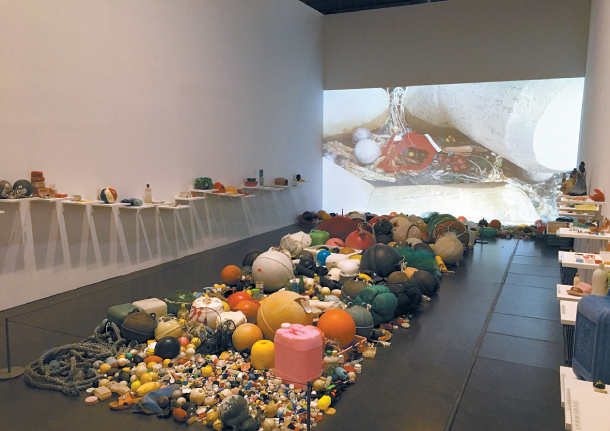 Through Feb.3: This exhibition, held to celebrate the 10th anniversary of Nam June Paik Art Center, features works from 13 teams of artists, including a spectacular TV installation “Elephant Cart” by Nam June Paik, dubbed the father of video art, and works by another important artist, Joseph Beuys, who was a friend of Paik. In particular, the exhibit includes Paik and Beuys’s collaboration piece, entitled “Coyote III,” which is a video of a concert the two held together.

The exhibit also includes works by artists who followed Paik, all of which correspond to the exhibition’s theme and are based on Paik’s concept of “Commons.” The artist wanted to create a common video market where information could be actively exchanged and distributed via free video communication.

Among the highlights are the “100% City” project by Rimini Protokoll, a team of German and Swiss artists; Korean conceptual artist Ahn Kyuchul’s installation work, entitled “There are things in the world that cannot be spoken in words;” and Korean artist Jeoung Jae Choul’s “Another Part of Kraken,” an installation on ocean waste.

Admission is free. The museum is closed on Mondays. Take bus Nos. 5000 or 5005 from Seoul and get off at the Singal five-way intersection in Yongin. 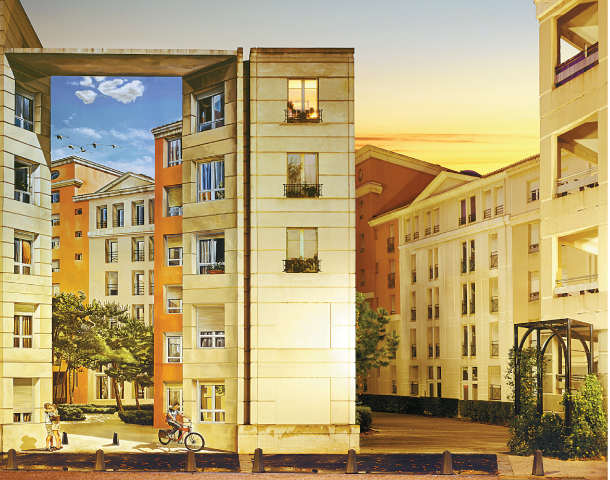 Through Feb. 17: Curated by William Ewing, a renowned photography writer and curator, and Holly Roussell, an art historian and curator specializing in Asian photography and art, the photography exhibition, featuring over 300 works by 135 artists from 43 countries, looks at civilization in the 21st-century, which stands on the brink of either evolution or self-extinction.

The show seems to challenge the iconic 1955 photography exhibition “Family of Man” curated by Edward Steichen, in its large scale, elaborate installation and ambitious attempt to help answer the question of where humanity stands and where it’s going.

The exhibition is divided into eight sections; “Hive,” “Flow,” “Alone Together,” “Persuasion,” “Control,” “Ruptures,” “Escape” and “Next.” The photos in each section can easily be categorized in the other sections due to their multifacetedness and layered meanings. Accordingly, the sections are smoothly connected to one another and despite the broad theme of “Civilization,” the exhibition gives no impression of being unfocused or superficial.

Admission is 2,000 won. The museum is closed on Mondays. Get off at Seoul Grand Park Station, line No. 4, and take the shuttle bus from exit 4.

Through Feb. 20: For this exhibit, the museum takes seven design studios in Korea to display design products made to serve the community and improve society.

The seven teams - 6699press, Garagegage, Zero Space Inc., Mun Seung-ji, COM, yang-jang and flat.m - all focus on delivering the best product, but in a way that goes beyond pleasing a single person.

For instance, furniture designer Mun’s chairs are designed in a way to leave no waste behind, while Zero Space Inc. uses the parts that are left over from other manufacturers to make their cushions and bags. Garagegage on the other hand, uses minimal amounts of wood to make their products as simple and effective as possible.

The exhibition is the second edition of the first “New Wave” exhibition held in 2013 at Kumho, which featured furniture and craftwork from new and rising designers. This second exhibition also highlights works from young designers. 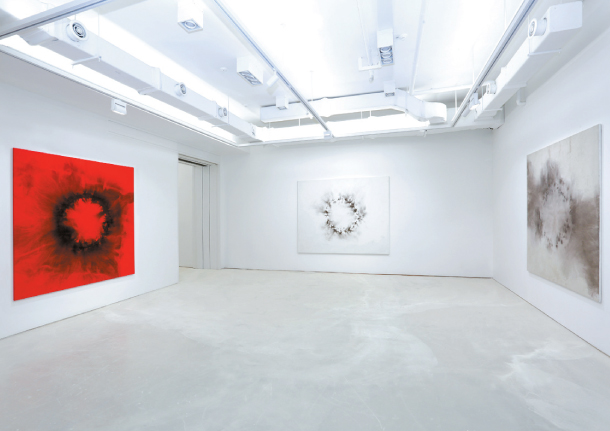 In 2010, the 68-year-old artist began to use techniques of fire torching and perforation to create unique abstract paintings. “For the last eight years, my work has been defined by flame, fire and smoke,” he said. He also burnt books, wood and polystyrene panels, using various instruments including blowtorches, to create sculptures. His solo exhibition features 46 of such works.

Meanwhile, Museum Ground consists of three galleries, a cafe and an art shop, gardens (including a sculpture garden) and a building used as a studio by Chun.