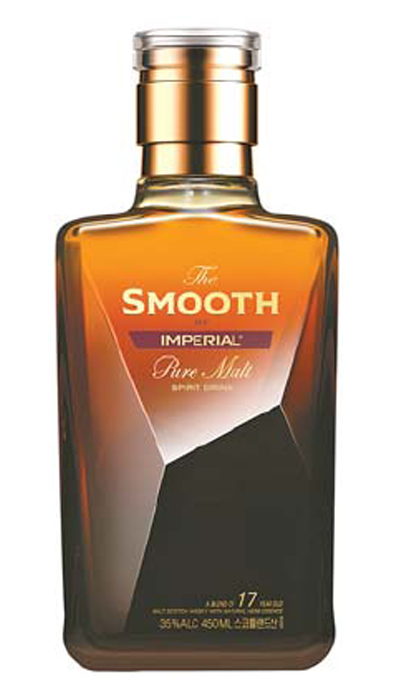 Pernod Ricard Korea is expanding its lineup of whiskey-based spirit drinks with Smooth 12.

“Smooth 17 took an 11-percent market share in the whiskey-based spirit drink market in the 11 months after its release,” said Kim Kyung-yeon, marketing head at Pernod Ricard Korea, during a press event Tuesday in Jangchung-dong, central Seoul.

As more people prefer to drink lighter drinks in a casual atmosphere, the general trend for the local alcohol market in recent years has been to reduce the amount of alcohol in beverages. Whiskey brands, that typically produce strong drinks, have been fighting this trend by releasing whiskey-based spirit drinks with less than 35-percent alcohol content.

Kim said the reason behind Smooth 17’s success was that it clearly specified the whiskey’s age and used pure malt whiskey.

“Most products in this spirit drink market use blended whiskey and don’t specify the age, which in the industry is typically because the base whiskey is under 3 years old,” she said. Blended whiskey combines whiskey made from grains other than barley and malt whiskey, which is more difficult to produce. Pure malt whiskey, on the other hand, only contains various types of malt whiskey.

The new Smooth 12 uses 12-year-old pure malt whiskey produced in Scotland. Using it as a base ingredient costs twice as much as blended whiskey, but the company decided to keep its price tag similar to its dominant competitors in the market.

“A trend in the global whiskey market is a rise in demand for malt whiskey [which is more expensive], while in Korea, low-alcohol drinks are popular,” said Kim. “The Smooth lineup satisfies both requirements.”

The company collaborated with the Banyan Tree Hotel & Spa in Jangchung-dong to open The Smooth Hotel & Malt Bar between Nov. 9 and 30. The hotel’s Moon Bar on the 20th and 21st floors will temporarily mainly serve cocktails and drinks based on The Smooth line.