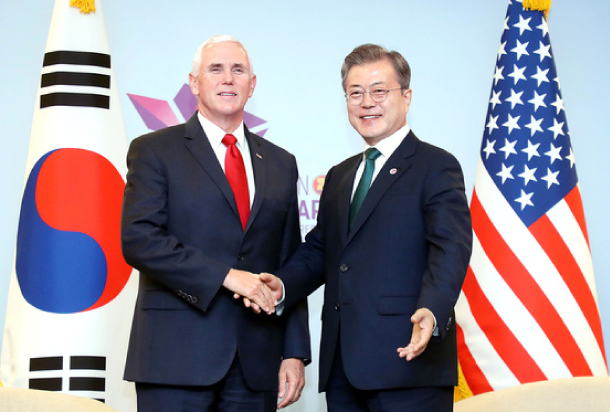 U.S. Vice President Mike Pence said Thursday that he was looking forward to discussing a second summit between North Korean leader Kim Jong-un and U.S. President Donald Trump with President Moon Jae-in, noting that progress had been made with North Korea over the past year.

Pence’s remark during a meeting with Moon in Singapore underscored that efforts are still underway to get Trump and Kim together again, possibly early next year.

“I look forward to discussing with you the plans for another summit between the president and Chairman Kim, and how we can work even more closely together in the days ahead to ensure peace and security can come at last to the Korean Peninsula,” Pence said in opening remarks at a meeting on the sidelines of Association of Southeast Asian Nations (Asean)-related summits.

The former Indiana governor noted Trump remained “hopeful” that his second meeting with Kim will “lay the groundwork for achieving our long-term objective of denuclearization,”

Pence said that he believed a series of diplomatic agreements with North Korea represented “meaningful progress for achieving our objective of complete and verifiable irreversible denuclearization.”

Moon said it was a “strong Korea-U.S. alliance” that made possible diplomatic breakthroughs on North Korea’s denuclearization and brought the North to the negotiation table.

Moon didn’t forget to thank Trump, who sent Vice President Pence on his behalf to Singapore to attend the Asean meetings, saying “his strong leadership and determination” brought about the current situation in respect to the North.

“What brought the North to the dialogue and led to the current situation owes to the strong Korea-U.S alliance,” said Moon.

“I am always thankful to President Trump for his strong leadership and determination,” continued Moon.

“Also importantly, North Korean leader Kim Jong-un also expressed his gratitude (to President Trump), saying it wouldn’t have been possible if it wasn’t for him,” Moon emphasized.

In response, Pence said he was “grateful for your generous comments about the president’s leadership.”

On a second Kim-Trump summit, Moon said, “If the second North-U.S. summit is realized, I expect there will be significant progress for the peace process and the complete denuclearization of the Korean Peninsula.”

Moon drew on the fact that Pence’s father, Edward Pence, was a Korean War veteran in emphasizing the bilateral alliance. “I feel reassured to have Vice President Pence join in our journey [toward the complete denuclearization of the Korean Peninsula], who has a deep connection with Korea just like his father,” he said.

“The Korea-U.S. alliance is the bedrock of our diplomatic policy and will continue to stand strong in the future as well,” Moon stressed.

Citing progress achieved with North Korea over the past year, Pence said, “No more missiles being fired, no more nuclear tests and our hostages have come home.”

He also noted it was “my great honor to be in Hawaii when the remains of the fallen services members began to return to American soil.”

Progress with the North gave “great hope in the days ahead,” Pence remarked, and said they would “see even more material steps” by Pyongyang to achieve the “shared objective” of the complete denuclearization of the peninsula.

The two, however, didn’t discuss possible sanctions relief for North Korea, according to the Blue House.

Wrapping up the first leg of a six-day overseas trip, Moon will fly to the island nation of Papua New Guinea Friday to attend the Asia-Pacific Economic Cooperation (APEC) summit on Saturday and Sunday. Moon will have a summit with President Xi Jinping of China on the sidelines of the APEC summit.