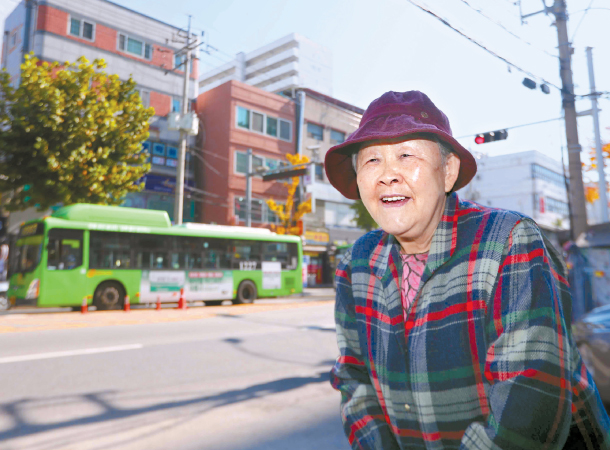 Yang Yeong-sil poses for the camera in front of her house. In the background is property that Yang donated to Korea University to fund scholarships. [KIM SANG-SEON]

Working hard, saving a fortune and spending every last penny on your children — to many people, this is the model of a virtuous life.

One elderly couple instead decided to donate their entire life savings to Korea University in order to help students in need, leaving nothing to their own children. When their story was reported last month, many were shocked to hear that the couple had donated 40 billion won ($35.3 million).

Kim Yeong-seok and his wife Yang Young-ae are happy to talk about their recent donation. Kim was born in 1931 in North Korea and moved south to join the South Korean army during the Korean War. Since the army only allowed people who were at least 18 years old to enlist, Kim, who was underage, registered his birth year as 1927. Yang, who is four years younger than her husband, first started selling fruit as a street vender with him in the 1960s.

In 1976, they bought a building near Cheongnyangni in eastern Seoul. They continued to purchase nearby properties until their real estate holdings totaled 40 billion won. The couple has two sons, both in their fifties and living in the United States. Unfortunately, Kim was admitted into the hospital after slipping and falling on Oct. 26, a day after Korea University celebrated their donation with a ceremony.

After their donation, many expressed their concern over whether the university might misuse the money for its own gains. However, Korea University said that they’ll make sure the money goes to students in need.

“We will honor their wishes and make sure that their donations go into constructing an [off-campus] building,” said Yoo Byung-hyun, vice president for Development, External Affairs and Capital Planning at Korea University.

“All the income from the building will be used to give scholarships to students in need. We all know how hard it was for the couple to accumulate such wealth, which is why we will make sure that no penny goes to waste.”

The JoongAng Ilbo talked to Yang on Nov. 1 at her apartment. Below are edited excerpts from the interview. 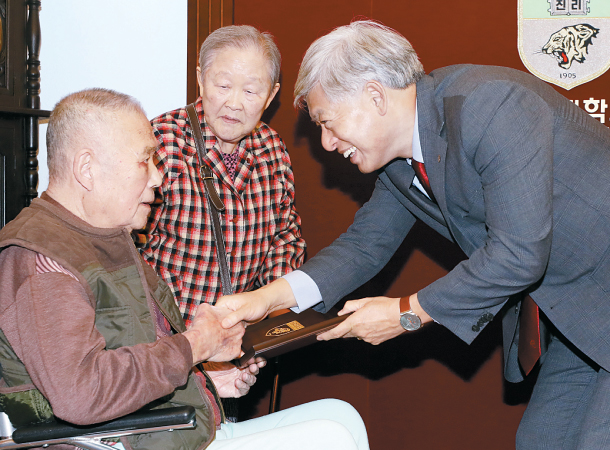 Q. How is your husband doing?

A. [He] slipped and fell in the bathroom the day after the donation celebration. When the people at Korea University heard about the news, they ushered him to Anam Hospital and gave him a VIP private ward. They even sent us an ambulance when they heard the news. He’s currently now in the hospital, and is unable to speak and even walk because his legs are not strong enough. I heard that he had an MRI scan yesterday.


Did you go to the hospital to visit him?

I haven’t had the time to go visit him yet. I was just too busy taking care of things. I also was down with the flu for a while. Today I showered for the first time in four days. I intend to go tomorrow. It’s not like he’s going to die this very second.
How was life after the donation celebration? Did you have any regrets about giving up your life savings?
No. I felt so good about myself after donating. I now understand why so many people insist on doing so.


From your experience, what are the benefits to donating?

The compliments. Whenever I go out in the neighborhood, people come up to me and tell me what a good deed I have done. Kids who see me point and tell their parents that I’m the “grandmother who donated.”


When did you decide to donate?

I went through breast cancer treatment for fourteen months up to last year. Last year was also when my husband went mute. Having experienced all that, I couldn’t shake off the feeling that my life might end at any moment. That’s when I decided to donate all my life savings, or at least half, to a school.


Did you ever consider giving your life savings to your two sons?


Why were you so invested in constructing a building?

The first time I purchased real estate was 42 years ago. Back then, I bought 383 square meters (4,111 square feet) of land for only 54 million won. When I bought the property, [each square meter cost about 160,000 won]. Now, each square meter is worth over 2 million won. After buying that property, I took out a bank loan and bought the building near it. In total, I own about 1,652 square meters of property in that area. It was always my dream to build a tall building, but I was never able to achieve that dream because I wasn’t able to buy the property in between and I never really had sufficient funds. Now, I’m too old to do anything.


You must be sad that you weren’t able to achieve your dream.

No. Actually, Korea University promised that they were going to build a building under our names. In the end, whatever the building is used for, my husband and I will have one with our names on it that will last forever.


How were you able to accumulate life savings of 40 billion won?

When I first bought my property, it cost me 54 million won. At the time of the purchase, I only had 4 million won. I took out a bank loan of 40 million won and borrowed 10 million from a close friend of mine. I had to work 18 years selling fruit in order to pay of my loan and the interest.


Weren’t your sons hurt when they heard you were going to donate your life’s savings?

There’s nothing I can do, [even if they are sad]. I bought them each a house in the United States, I think that I’ve done enough for them. They both make a decent living now, and besides, money is something that you have to earn through hard work. Letting your children inherit your fortune doesn’t always guarantee that they will live a happier life. If something goes wrong because of that inheritance then the parents are to blame for ruining their children’s life.


Still, there are some people who don’t understand why you wouldn’t want to give your children a single penny. What do you have to say to those people?

I never even bought my children a bowl of jjajangmyeon (black bean noodles) when they were growing up, and I never expected them to give me anything in return. I saved up all that money, living as frugally as I could. It would be a shame to see it all go to waste after I die. Plus, there’s no guarantee that my children will spend my fortune wisely when I’m gone. [By donating], I’m guaranteed my fortune will go to a good cause. That’s why I don’t regret my decision, not for a second. In truth, I think it’s the best thing I’ve done in my entire life.


Was there any special reason why you chose to donate that money to Korea University?

What are you planning on doing with the rest of your life, seeing that you have already given up your life’s savings?

Korea University had already promised me and my husband that they will support us financially until we die. They also promised to take care of all our future medical bills. This apartment I live in costs about 80 million won. I plan on giving this apartment to Korea University as well after I die.