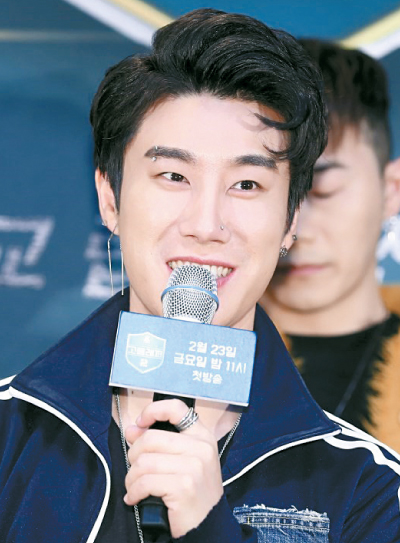 Rapper San E posted a track on Saturday targeting the rapper Jerry.k, who criticized San E’s “Feminist,” a song he released on Friday after being criticized for uploading footage of a recent bar fight between two women and four men near Isu Station in Dongjak District, southern Seoul.

Titled “6.9cm,” the song directly criticizes Jerry.k, calling him a “parasite” and “an opportunist,” who is trying to take advantage of the situation for popularity. San E also implies that Jerry.k is being disingenuous and only pretending to care about women.

The song also criticizes reporters, who the rapper claims are on “witch-hunt” against him.

San E drew a heated reaction from the public after he uploaded footage of the recent fight in Isu on his Instagram. The uploaded video was allegedly taken without consent.

Following the criticism, the 33-year-old rapper deleted the video and uploaded a post that read, “I am F E M I N I S T.” A few hours later, he uploaded a video for “Feminist” on YouTube.

The introductory comment of the video says that he “does not hate women, but situations in which hate brings hate.”

The lyrics include gender-related controversies that take place these days from a male perspective.

In the song, San E asks women, “You demand for privileges, but why won’t you go to the military?,” “Why do I have to pay for dates?” and “What more do you want when I gave up space on the subway, bus and parking lot?”

A day after “Feminist” was released, Jerry.k unveiled a short track targeting San E on YouTube.

Titled, “No You Are Not,” the lyrics criticize San E, saying that what he said are arguments based on groundless facts that insist that gender equality actually exists. Jerry.k also pointed out the irony in what San E says in his song by pointing out the fact that San E was exempted from the military.

After the song was posted on Friday, San E’s scheduled performance for a women’s sports clothing brand was canceled.