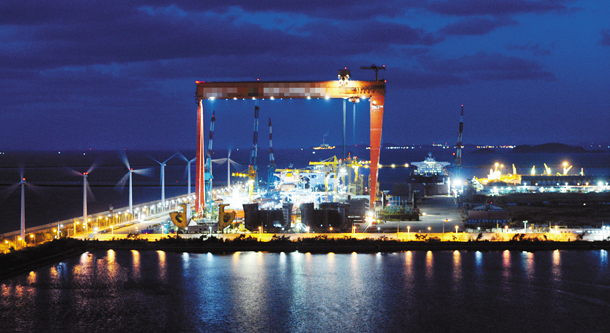 On Thursday, Daewoo Shipbuilding and Marine Engineering (DSME) announced that it won’t have to let go of as many employees as expected as its earnings have improved. While the company and its creditors projected about 7.5 trillion won ($6.6 billion) in revenue this year, DSME said the situation has improved and the company is likely to ink over 9 trillion won in revenue.

DSME isn’t the only shipbuilder anticipating calmer seas ahead. Korea’s biggest shipbuilders have started inking more orders this year, a change that some think signals the end of the dramatic downturn that has plagued the industry since 2008.

Here are the basics on the slow recovery of Korea’s shipbuilding industry and the crisis that very nearly caused it to sink.

Currently, all three of Korea’s largest shipbuilders - Hyundai Heavy Industries (HHI), Samsung Heavy Industries and DSME - are still undergoing restructuring. The situation is worse at smaller companies - according to a report from the Export-Import Bank of Korea earlier this month, only one out of 10 midsized shipbuilders inked any orders in the third quarter this year.

Shipbuilding used to be one of the highest earning industries in Korea back in the early 2000s, but the financial crisis in 2008 proved near-fatal for shipbuilders as the volume of global trade plummeted and the demand for ships plunged. While over 5,000 ships were ordered globally in 2007, the number declined to roughly 3,400 in 2008 and then fell to around 1,200 the following year.

The bigger problem was that the shipbuilders had already expanded their facilities to meet growing demand, unaware that such a crisis would freeze the global economy. Shipbuilders hurriedly turned to offshore plant construction in order to survive as oil prices soared. The decision ended up putting the companies in even deeper water.

Firstly, Korean shipbuilders lacked expertise in designing offshore plants, making the process more expensive and longer than expected. To make matters worse, oil prices plummeted in 2014, causing customers to cancel their orders or postpone delivery. The losses from the offshore plant business snowballed and were reflected on shipbuilders’ balance sheets in 2015 and 2016, hugely damaging their earnings reports.

In 2016, all three major shipbuilders submitted turnaround measures to their creditors and the government. The proposals included layoffs, selling assets and subsidiaries and pulling up productivity.

Q. But recent news stories have reported that this year Korean shipbuilders have taken more orders than companies from any other country in the world. What’s changed?

According to shipbuilding market tracker Clarksons Research, Korean shipbuilders have won orders for 10.26 million compensated gross tonnage (CGT) through October this year, taking 45 percent of global orders. It is highly likely that Korea will end the year as the country that won the most orders for the first time in seven years.

CGT reflects both the number of ships and the level of complexity involved in making them. It is determined by multiplying the tonnage of the ship with a coefficient determined by its type and size.

Global orders for ships have not yet bounced back to the level of the early 2000s, but Korean shipbuilders have succeeded in winning more of the orders out there, largely thanks to their high level of technology in building complicated ships like liquefied natural gas carriers.

Q. Why did Korean shipbuilders still report disappointing results in Q3 if they have all these new orders?

It’s true that Korean shipbuilders are recovering, but they need more time before the orders are actually reflected on their balance sheets. In shipbuilding, most of the payment generally comes at the time of delivery, which is usually a year or two after the contract is agreed.

This also means the drought in orders that shipbuilders faced in 2016 is affecting their earnings this year.

Q. How does the recent increase in orders compare to a good year before the shipping industry crashed?

Korean shipbuilders won orders worth $94.29 billion in 2007, before the financial crisis that started with the fall of Lehman Brothers the following year. In 2009, after the crisis, the figure plummeted to $14.19 billion.

Earnings from new shipbuilding orders did improve from time to time, but have never been able to bounce back to the level they were at before 2008.

The market picked up a bit in 2010, with global orders at 45.4 CGT. A further increase in 2013 took orders as high as 61.1 CGT, but the market never fully recovered. While Clarksons projected global orders for ships this year will increase compared to the previous year, it also said the size will be limited to only two-thirds of the average orders made between 2011 and 2015.

Q. How many people are working in shipbuilding now and how does that compare to before the industry crashed?

Shipbuilding is a labor-heavy industry and still a major employer in Korea. The number of jobs in Ulsan and Geoje, cities in South Gyeongsang where major shipyards are located, has fallen significantly over the years due to the lack of orders at shipyards.

The number of subscribers to employment insurance for the shipbuilding sector in Ulsan, where Hyundai Heavy is based, fell from roughly 63,000 at the end of 2015 to 38,000 by the end of 2017, according to data from the National Assembly. In Geoje, where Samsung Heavy and DSME shipyards are located, the number of insured people fell from 76,000 to 52,800 during the same period. Each shipbuilder has been conducting mass layoffs as part of their turnaround measures.

For example, DSME cut the number of employees from 13,199 at the end of 2015 to 9,960 in June. The original plan crafted in 2016 was to cut the number to below 9,000 by the end of this year, which means another massive layoff is necessary, but according to a recent announcement by DSME, the shipbuilder will likely hold back on its plan for a while and reduce the number it has to let go.

Q. What is driving the recent increase in orders?

Korea’s expertise in high-tech ships like liquefied natural gas (LNG) carriers has driven gains. LNG carriers need to be designed in a way that reduces the evaporation of natural gas. The overall demand for LNG carriers is rising around the world, largely due to countries increasingly turning to more environmentally-friendly fuel.

Ship prices that had plummeted due to oversupply are slowly rising. In mid-2016, Clarksons measured global shipbuilding prices at 121. By October this year, that figure had hit 130. Clarksons’ index compares ship price increases to January 1988, which is set at 100.

Q. Does this mean that the shipbuilding sector’s woes are over?

Many experts say the decade of recession in the shipbuilding market is slowly taking a turn, and by 2020, the market will see some substantial improvements.

The International Maritime Organization announced in 2016 that ships will have to use marine fuels with sulfur content of no more than 0.5 percent from January 2020, a major change from the current limit of 3.5 percent. The organization hopes to cut greenhouse gas emissions with the cap.

For shipping companies, this means they have to change their marine fuels from cheaper options such as bunker C oil to more costly but cleaner marine gas oil or liquefied natural gas, or add a device called a scrubber system to reduce the amount of sulfur oxide emitted by the ships. As a result, shipbuilders are expecting orders for cleaner ships to increase as shipping companies are forced to replace their older ships.

Clarksons also projects that global trade will continue pushing orders for new ship, although it’s already too late for many shipbuilders. That some shipyards were forced to close after the industry crashed may prove a boon for those that stayed afloat, however, as the recovery may come a bit faster with a little less competition.