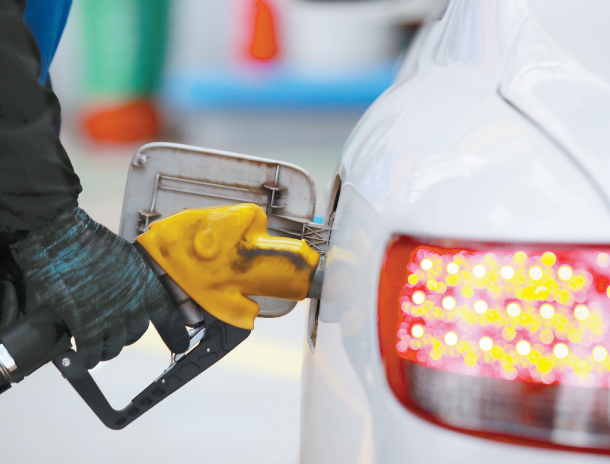 A customer pumping gas at a gas station in Seoul on Sunday. Gas prices have dropped more than what the government initially expected. [YONHAP]

The government fuel tax cut, which was implemented to ease the burden on rising crude oil prices, has turned out to be more effective than initially expected.

According to the Ministry of Trade, Industry and Energy on Sunday, the average price of gasoline at gas stations nationwide was 1,575.2 won ($1.40) per liter during the second week of November. This is an 85.2 won, or 5 percent, drop, from the 1,660.4 won average just a week earlier.

On Saturday, the ministry said the average price of gasoline had further fallen to 1,556.8 won per liter - 133.5 won less than the 1,690.3 won it sold for on Nov. 5, the night before the government’s fuel tax cut went into effect. 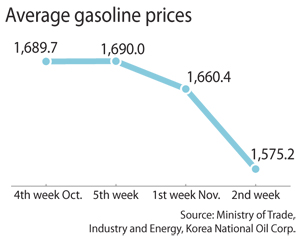 On average, the government cut 15 percent off of all fuel taxes including gasoline and diesel in the hopes of easing the burden created by rising international crude prices. It was the first fuel tax cut adopted in a decade.

“As the situation [of low-income households and small and medium-sized enterprises] becomes more difficult with rising international crude prices, we have decided to aim for a psychological effect that will help the economy by increasing disposable incomes,” Ko Hyoung-kwon, deputy finance minister said in late October.

Among gas stations, the government-supported Altteul Gas Station saw the biggest drop in prices - its gasoline costs 135.5 won less than it did on Nov. 5.

Other major brands including SK, GS, S-Oil and Hyundai Oilbank have cut gasoline prices by 133.3 won.

By region, Jeju lowered its gasoline prices the most. The island has seen a 169.4 won drop in average price compared to Nov. 5. Daejeon followed, as prices have fallen an average of 149.6 won, while Incheon came in third after seeing a 142 won drop.

Seoul gas stations on average lowered their prices by 134.9 won while Gyeonggi gas prices fell by 137.2 won per liter.

Seoul and Gyeonggi account for 39 percent of all fuel sold in the country.

However, as of Saturday, 173 gas stations around the country - 1.5 percent of the nation’s gas stations - have not taken part in lowering fuel prices. The ministry said that these gas stations failed to deplete all of the gas that they had stockpiled before the Nov. 6 fuel tax cut was implemented.

The fuel tax cut will be applied for six months.