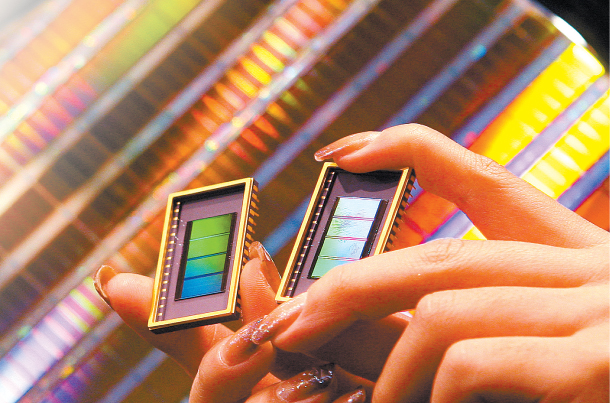 “The earnings rally that has continued though the third quarter is now history,” he told executives at the company’s NAND flash production site in Cheongju, North Chungcheong. “We should get prepared for the downturn so we can profit even when the market is in bad shape.”

Despite having the world’s largest memory chip producers - Samsung Electronics and SK Hynix - Korea in a tough position. Memory chip prices have been falling more rapidly and steeply than expected amid a possible end to the supercycle in the chip industry and China rapidly adding capacity with state support.

DRAMeXchange, a global market research firm for memory chips, predicted back in September that the average DRAM spot price could go down 5 percent on quarter in the fourth quarter, but it turned out that in October, the first month of the three-month period, spot prices dropped 10.7 percent. Some analysts have offered even gloomier projections, forecasting that prices could nosedive as much as 25 percent.

The spot price of 128 Gigabit NAND flash memory chips started dropping earlier than DRAM - back in July. Since then, prices in that category have slumped 15.4 percent, according to the Bank of Korea.

“The extent of downfall in DRAM spot prices in the fourth quarter has been larger than market expected, and the fall could continue into the first quarter of next year,” said Song Myung-sup, an analyst at Hi Investment and Securities. “It seems the market should adjust its expectations lower for the price decline and for chip maker earnings in the near term.”

The total revenue of the global DRAM industry grew by 9 percent on quarter in the third quarter to hit a new quarterly record, said DRAMeXchange. But it cited increased shipments rather than rising prices. Shipment increases have been driving the strong rise in memory chip revenue for more than two years, the market researcher noted.

Contract prices for DRAMS that began sliding in October are expected to keep falling through the fourth quarter, ending the upswing that has lasted for more than two years. The future price declines will be “rather steep,” because the market is facing both oversupply and high inventories, the market researcher said. It predicted the slump will worsen in the first quarter of 2019 as excess inventories will remain at memory suppliers.

Yoo Jong-woo, an analyst at Korea Investment and Securities, said the demand outlook for memory chips is worsening as the prospects for the global economy worsen, hit by several factors including the trade row between the United States and China,” he said. “DRAM prices are projected to fall 7 percent on quarter in the fourth quarter, and it may get even worse.”

To match declining demand, both Samsung and SK Hynix are expected to adjust production. Samsung is likely to slow DRAM facility expansion in Pyeongtaek, Gyeonggi, whereas SK Hynix is seen shrinking production volume at its factory in Cheongju, North Chungcheong and another in Wuxi, China.

The dismal outlook has led brokerage houses to scramble to adjust prices targets for Korean chip maker stocks downward. HI Investment and Securities, one of the most pessimistic securities firms regarding the sector, has recently revised downward the target price for Samsung Electronics from 55,500 won ($49) to as low as 51,000 won, which is just 1,000 won more than the price when the stock split 50 to 1 in May.

Overseas investment banks also added to the fears. After major chip makers reported their third quarter earnings, Citibank said in a report that concerns over the DRAM price downturn and NAND oversupply would continue through the first half.

Barclays went so far as to say in a November report that the ending of the semiconductor cycle could have a negative impact on Korea’s economic growth, given the country’s heavy reliance on chip exports.

The share of exports from semiconductors grew from 19.7 percent in January to as much as 21.2 percent in October, according to the Ministry of Trade, Industry and Energy. The ratio of the manufacturing of electronic devices, including semiconductors, in the gross domestic product was as high as 8.4 percent as of the second quarter. 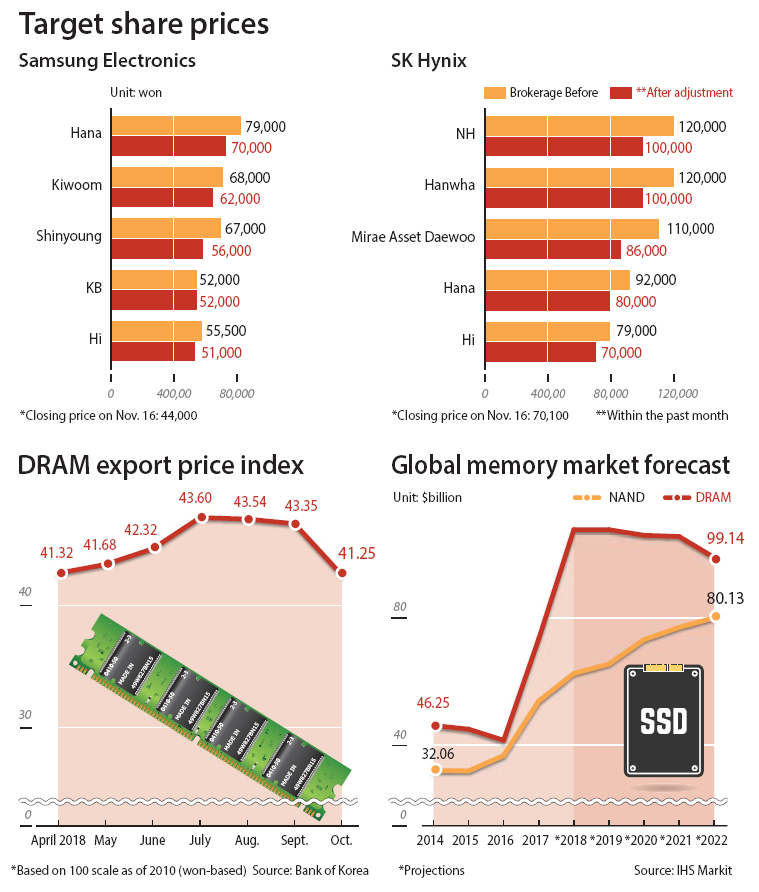 Korea isn’t standing still and allowing China to just catch up and take the lead. Samsung Electronics and SK Hynix have come up with a series of new products that they hope will widen the technological gap with their Chinese counterparts.

SK Hynix on Monday announced it succeeded in developing a second-generation 10-nanometer-class 8-Gigabit DDR4 DRAM, which is 20 percent more productive and uses 15 percent less power than the preceding generation. The new memory chip, to be used in servers, PCs and mobile devices, supports data transfer rates of up to 3,200 megabits per second, the fastest data processing speed for the DDR4 interface. It will be commercialized in the first quarter next year.

SK Hynix captured 27.4 percent of global DRAM market as of the first quarter, according to IHS Markit. Samsung Electronics achieved a 44.4 percent share. Micron Technology accounted for 23.1 percent and Taiwan’s Nanya Technology made 2.7 percent of the total.

It is highly efficient and drains the batteries of premium smartphones more slowly than older technologies.

Experts say Korea is ahead of China by up to five years. China is gearing up to roll out 3D NAND flash chips next year, but that technology was already developed for mass production at Samsung and SK Hynix four years ago. Those products are no longer being made by the two companies.

“The memory chips China is bracing to churn out next year are optimized for speaking dolls, whereas those made by Korea are for premium smartphones,” said Choi Jae-sung, a professor of semiconductor equipment engineering at North Chungcheong’s Far East University. “Korea still has some room for widening the technological gap with China.”

China has also hit a stumbling block in its chip-making ambitions: the United States. The Trump administration in late October blocked Fujian Jinhua Integrated Circuit, a Chinese state-backed chipmaker, from dealing with U.S. suppliers, by putting it on a list of entities to be banned from purchasing components, software and tech goods from the United States. The measure came amid allegations the chipmaker stole intellectual property from Micron Technology, a U.S. semiconductor firm, and for national security reasons.

Fujian Jinhua Integrated’s DRAM production is now in limbo. Trial production of the chips started this year, and mass production was slated for early next year. The company is finishing off its $5.65 billion fabrication facility in Jinjiang, a city in the southeast province of Fujian.

The newbie is a product of China’s national plan announced in 2015 to dominate 10 promising industries, known as “Made in China 2025.”

Amid discouraging statistics, S&P Global Ratings revised its outlook on SK Hynix from stable to positive on Thursday despite moderating demand growth and increasing supply.

“We revised the outlook and affirmed the rating to reflect our view that Hynix is likely to generate strong operating cash flows and adjust its investment plans to maintain a net cash position over the next 12-24 months,” said S&P Global Ratings. “This will be the case even if the memory chip market softens significantly.”

Optimists say the heyday of semiconductors won’t likely come to an immediate end, given the demand for memory chips in tandem with the progress in artificial intelligence, autonomous vehicles, big data and 5G connections.