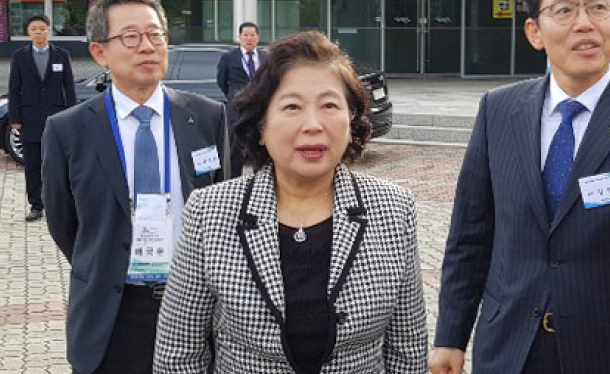 Hyundai Group Chairwoman Hyun Jeong-eun stops at a rest stop in Gangwon on Sunday on her way to Mount Kumgang in North Korea to celebrate the 20th anniversary of the launch of South Korean tours to the mountain resort. [YONHAP]

A South Korean delegation traveled to North Korea Sunday to celebrate the 20th anniversary of the launch of tours to the North’s Mount Kumgang resort.

It was the first time in three years that a group was allowed to travel to the North to celebrate the launch of the tours, which have been suspended for the past 10 years. They will return to the South today.

About 30 members of Hyundai Group, including its Chairwoman Hyun Jeong-eun, and members of the Korea Tourism Organization and Korea Land and Housing Corporation, lawmakers and former South Korean ministers traveled to the North on Sunday for the two-day celebration on the mountain.

Hyun, who was visiting the North for the third time this year, is expected to brief the press about her trip upon her return today. Hyundai hosted the celebration with the North’s Asia-Pacific Peace Committee.

The South’s Unification Ministry denied the possibility that the delegation may have spoken with their North Korean counterpart about possibly restarting the South Korean tours to Mount Kumgang, which ended in 2008 over a fatal shooting of a South Korean female tourist.

“The trip has nothing to do with reopening the tours,” a ministry official told reporters on Sunday.

The conditions are likely to include UN sanctions on the North that forbid any type of bulk-cash inflow into the country.

Pioneered by Hyundai Group’s late founder Chung Ju-yung, Hyun’s father-in-law, the group tours began on Nov. 18, 1998, when a cruise ship brought about 1,400 people from South Korea to the mountain resort. In 2003, groups started going by land as well. South Korea stopped the tours after the fatal shooting of a South Korean female tourist by a North Korean soldier in 2008, which the South has yet to receive an explanation or apology for. Nearly two million tourists had visited the resort up until 2008.

The Hyundai Group has been hosting the celebration of the tours almost every year since 1999, though 2003 was the first year it hosted the event with the North. The celebration stopped in 2015 after bilateral relations worsened after an incident in the demilitarized zone that August. Two South Korean soldiers were wounded by land mines, which was followed by an exchange of fire in the DMZ and the South’s resumption of propaganda broadcasts near the border for the first time in 11 years.