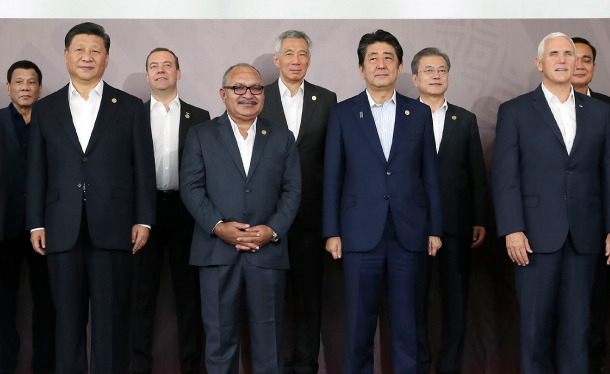 Korean President Moon Jae-in, second from right in the back row, poses for a commemorative photo at the Asia Pacific Economic Cooperation (APEC) summit in Papua New Guinea on Sunday. During his six-day trip, he also held bilateral talks with a series of leaders including Chinese President Xi Jinping, front row left, on Saturday and U.S. Vice President Mike Pence, front row right, on Thursday in Singapore. [YONHAP]

Moon instead focused on international cooperation to achieve the denuclearization of the North in a peaceful manner. The president returned home from his six-day trip to the island countries on Sunday.

During his summit with President Xi Saturday on the sidelines of the Asia-Pacific Economic Cooperation (APEC) in Papua New Guinea, Moon expressed hope for coordination between the two neighbors for closer bilateral ties as well as a peaceful solution to the denuclearization of North Korea.

“As the strategic interests of Korea and China lie in the same goal of prosperity and peace in Northeast Asia, I wish for closer coordination with China to enhance bilateral ties as well as peace process on the Korean Peninsula,” Moon said in his opening remarks of his fourth summit with Xi.

Xi responded by saying that bilateral cooperation between the two had been “very effective in stabilizing the Northeast Asian region,” apparently referring to the flurry of diplomacy early this year, including three inter-Korean summits and the first North-U.S. summit in June.

“China and Korea share in the pursuit of peace and security of the Korean Peninsula through cooperation with neighbors and carrying out objective and fair international order,” he continued.

The two leaders agreed that a second North-U.S. summit next year and a planned visit by North Korean leader Kim Jong-un to Seoul would be a “crucial watershed point” in resolving the issue of North Korea’s denuclearization, according to Blue House spokesman Kim Eui-kyeom, who briefed reporters on the 40-minute meeting.

Kim also noted that Xi and Moon had agreed that an “atmosphere for resolving the issue of the Korean Peninsula is coming into place.”

Xi was said to have told Moon that Kim Jong-un invited him to visit the North and that he was considering accepting it sometime next year, according to the Blue House.

Moon thanked Xi for his “important role” in denuclearization progress, and invited the Chinese president to visit Seoul, which Xi said he was willing to do. While the two leaders agreed that progress was being made on solving North Korea’s denuclearization, neither Xi nor Moon mentioned the possibility of sanctions relief for North Korea, according to the presidential office.

Moon also didn’t mention sanctions relief for the North during his summit with Russian President Putin on Thursday on the sidelines of the Association of Southeast Asian Nations (Asean) summit in Singapore.

During the meeting, Putin said that if progress continued on the North’s denuclearization, “corresponding measures should follow,” including easing the economic sanctions that have been damaging the North’s economy. But rather than agreeing with Putin, Moon simply asked that Russia “play an active role” in helping the North take bolder steps toward denuclearization.

Moon also didn’t refer to possible sanctions relief as a “corresponding measure” during his meeting with U.S. Vice President Pence. While Pence acknowledged that much progress had been made in denuclearization talks, he noted that “much work remains” to be done to rid the North of its nuclear arsenal. Moon didn’t hide his high expectations for the second Kim-Trump summit, saying it would lead to “significant progress for the peace process and the complete denuclearization of the Korean Peninsula.”

Moon’s sidestep on sanctions relief for the North was contrasted to what he said during his meeting with President Emmanuel Macron of France on Oct. 15 in Paris. Moon stressed that easing UN sanctions could further facilitate the North’s denuclearization process.

Noting that North Korean leader Kim had promised him “not only to halt nuclear and missile tests and dismantle their production facilities but also destroy all nuclear weapons and materials stockpiled should the United States take corresponding measures,” Moon told the French president that “if North Korea’s denuclearization is judged to enter an irreversible phase, its denuclearization should be further facilitated by easing UN sanctions.”

Moon asked Macron to help ease economic sanctions on the North “as the president of a permanent member of the UN Security Council.”

Instead of agreeing to Moon’s request, Macron expressed hope that the North would take “substantive measures for its denuclearization.”