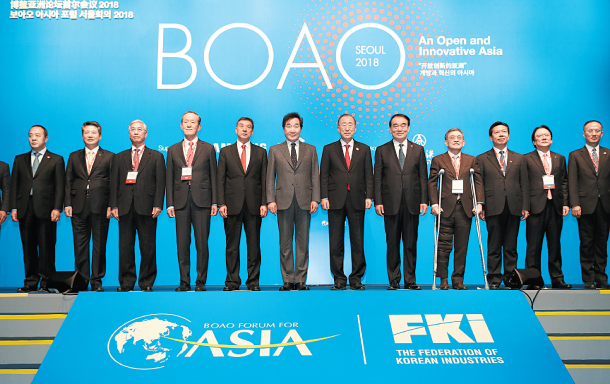 Business leaders from Korea and China gathered in Seoul on Tuesday to discuss the importance of Asian countries joining forces amid the rise of protectionism and Donald Trump’s “America First” policy.

Former UN Secretary General Ban Ki-moon, who was elected chairman of the Boao Forum Asia in April, said in a speech that Asian countries such as Korea, Japan, Singapore and China have achieved industrialization and urbanization by integrating with the world economy. As a result, hundreds of millions of Asians escaped poverty and the continent became the growth engine of the world.

Other Asian countries are following in their footstep, Ban said, having recognized globalization and the opening up of the markets as the best route to economic development and prosperity.

“Even though some part of the globe is moving in a different direction, Asia is supposed to maintain its open-door policy and expand, I believe,” Ban said.

Some 800 businessmen, politicians and government officials from Korea and China attended the Boao Forum for Asia Seoul Conference 2018, which kicked off on Monday with the theme “An Open and Innovative Asia” at the Hotel Shilla in central Seoul. Tuesday was the second and final day of the conference.

The main Boao conference takes place yearly in Hainan Province, China, and regional meetings have been held elsewhere. This is the first time a regional conference is taking place in North Asia outside of China.

The number of attendees of the Seoul event, 800, is up to four times bigger than for other regional meetings, and Ban is said to have played a role in Seoul being selected as a host.

Hyundai Motor Group Executive Vice Chairman Chung Eui-sun, SK Chairman Chey Tae-won and CJ Chairman Sohn Kyung-shik appeared at the venue to greet Chinese visitors but did not participate in the official schedule. Samsung Electronics Vice Chairman Lee Jae-yong did not show up. He used to be a board member of the forum but resigned earlier this year.

Only a few key executives from conglomerates showed up at the welcome banquet that took place at the Sebitseom, a cultural complex on the Han River, on Monday. Kim Dong-yeon, deputy prime minister, was one of the few notable figures seen at the venue. Even the Federation of Korean Industries (FKI) Chairman Huh Chang-soo did not appear.

The forum is a key event for Seoul, but the FKI, the co-host, is keeping a low profile after its involvement in corruption helped topple the Park Geun-hye administration. Ever since, the FKI has been trying to take off its identity as a business lobbying group and reinvent itself as a think tank. The Boao Seoul forum is considered part of that effort.