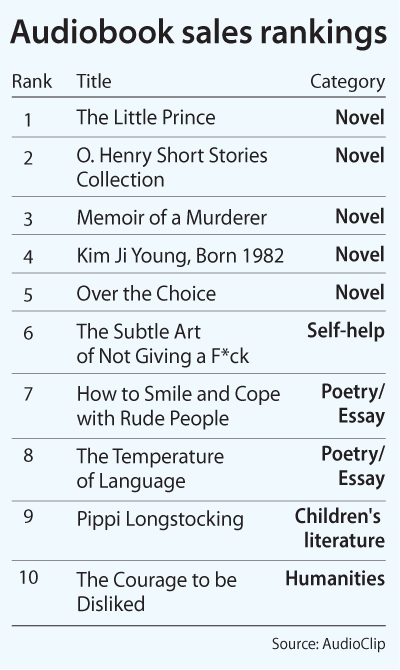 Since Naver introduced its audiobook service last July, the product has become increasingly popular as more writers and celebrities have taken interest in the market.

According to Naver’s AudioClip, the most popular audiobook measured by sales last month was a collection of short stories by American writer William Sydney Porter, better known by his pen name O. Henry.

The collection includes “The Gift of the Magi” and six other short stories. In the first two weeks following its release, the audio book was purchased 1,000 times. The version of the novel is helped by the choice of narrators: Jung Hae-in, who shot to fame earlier this year when he starred in the JTBC drama “Something in the Rain.”

Writer Kim Young-ha narrated his “Memoir of a Murderer,” which ranked fifth in sales last month. The novelist explained that audiobooks represent a new platform for stories.

“We read books with our eyes, but humanity has long listened to stories with its ears,” said Kim. “I think listening is one of the many methods of reading.”

Some writers credited audiobooks for giving new life to their works.

Cho Nam-joo, author of “Kim Ji Young, born 1982,” said the platform provides a fresh take on her work, which delves into the hardships faced by women in Korean society through protagonist Kim Ji Young.

“It was a natural conversational voice, so it felt as if Kim Ji Young was telling me her story herself,” said Cho.

Jung Mun-jung, author of “How to Smile and Cope with Rude People,” agreed with Cho saying: “Listening to the audiobook, I thought ‘this is my writing’ but it wasn’t solely my own.”

When Naver’s AudioClip started its audiobook service in July, novels, poems and essays led. But listener preferences have diversified, with self-help and humanities books growing increasingly popular. In last month’s rankings, self-help book “The Subtle Art of Not Giving a F*ck” placed fourth.

According to analysis by Naver of audiobook sales data from July to October, customer numbers totaled 8,000. The reorder rate was 15 percent, and sales totaled over 10,000.