The financial authorities will not label pharmaceutical companies that have experienced operating losses due to massive investment in R&D as securities under supervision, a status that puts them at risk of being delisted. 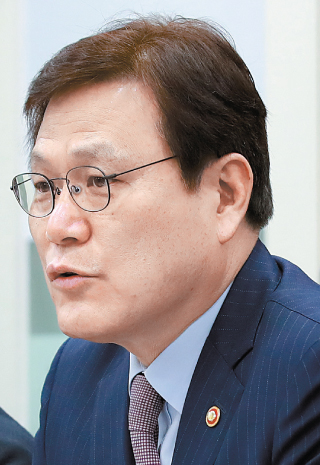 He said while the global pharmaceutical market is growing 5.2 percent a year on average, developing new drugs is costly, and the chances of success low. Yet he stressed that the industry is very important to the nation’s future.

“Despite its short history, in the last five years exports [from the Korean biopharmaceutical industry] have grown 13.6 percent, while in the last three years, we were able to export 33 new drug technologies and achieve 10.4 trillion won ($9.19 billion) worth of contracts,” Choi said. “The business is seen as having sufficient growth potential.”

He said the government this year will pass special regulations that will keep biopharmaceutical companies that adhere to new accounting standards proposed by the financial authority in September from being labeled as stocks under supervision.

Concerns are on the rise in the local biopharmaceutical industry since under the new accounting guidance companies have to account for R&D costs as expense. Until now, the common practice was to book these outlays as nontangible assets.

When R&D is expensed it is reflected immediately on the income statement and often results in a heavy loss.

Celltrion, the largest biopharmaceutical company by market capitalization on the Kospi market, spent 227 billion won last year on R&D, 74.4 percent, or 168.8 billion won, booked as nontangible assets. If all the R&D costs had been expensed, net profit would have fallen by half. For smaller companies, taking R&D expenses as costs could result in operating losses, which could put them at risk of being delisted from the stock market. That would limit their access to capital in the market.

FSC Chairman Choi stressed the importance of the capital market as an investment channel for biopharmaceutical companies.

“The corporate financial market has been developing with banks and the government at the center,” Choi said. “But because of the conservative practices of banks, lending only on collateral, it is difficult to invest in future value and growth. Venture capitals firms, which are dependent on government funding, are limited in their ability to make bold investments because of strict auditing and the need to be balanced when deploying funds,” Choi said. The role of the capital market, where private investment plays a central role, is important, he added.

The FSC chairman also said the government will work on creating a solution that will ease the burden faced by pharmaceutical companies forced to conduct non-essential business in order to meet the annual revenue minimums needed to stay listed.

“Such actions will not only contribute to improving the accounting transparency of biopharmaceutical companies but also substantially address the uncertainty that is created by the possibility of being delisted from the stock market,” Choi said.